Nigeria vs Ghana: Eguavoen’s blessings are not in disguise, deployment will be key to triumph

Super Eagles have an abundance of talents. In some terms, they’re called an embarrassment of riches. They are blessings, full-blown top performers, not in disguise; they are known for their danger, revered for their ability and mocked when they don’t play to the heights of their reverence.

When this assembly of gods (tribute to Basketmouth) comes to town, the least any Nigerian football fan expects is performance, and the highest is victory.

When you have what Super Eagles coach, Austin Eguavoen has at the moment, especially in the team’s attack, it’s safe to have a pleasant headache. But that cerebral rage will only be positive in their yields if mistakes are cut to the barest minimum and deployment is gotten to the letter.

Nigeria has one of the most potent attacks in Africa, on paper. In Victor Osimhen and Odion Ighalo, they have two of the best marksmen Africa can boast of. In Emmanuel Dennis, Umar Sadiq, Samuel Chukwueze, Kelechi Iheanacho and Moses Simon, there are brilliant X-factors capable of many things on their day. It’s such a rich list to pick from, but it’s never enough. 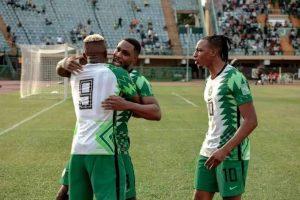 Eguavoen can rummage into his bag of goodies and still have his hands picking a fine piece, but where he places the piece in the jigsaw matters more than its beauty.

The Super Eagles’ strength could be their greatest weakness if strategy isn’t on point. A painful reflection of that was established at the AFCON against Tunisia. It takes getting the right details and fits to make ‘a team nobody wants to play against’, in the words of Chelsea manager, Thomas Tuchel.

Nigeria can easily become a team nobody wants to face in the world, designed for grit and mastered to devastation. Where its struggles threaten a blot, the team is shaped to and reformed to strength, and where its strengths rise high and above, it’s flexed and extended to stay on top.

Ahead of the game against Ghana, Eguavoen hardly has enough time to prepare the team to his greatest taste but national team football is about results and what works at each point. For all the kicks against Gernot Rohr, he got the team winning games convincingly when he still had his onions causing a teary eye.

Nigeria has the names and numbers but it takes only a disappointment to go numb and dumb and Nigerians won’t appreciate a second dose of that. It will be toxic and lethal.

Ghana are a banana peel by every degree you may use to judge them. Humbled, hungry to prove a point and honest about their current state. Eguavoen must look above his shoulders and behind his back.

There may never be opportunities for the mistake of choosing and using a wrong player at any point. A game of fine margins hardly leaves details to correct. The team must be set when the whistle blasts.

Having the names the Super Eagles parade at the moment is a blessing many generations don’t get to see, but such times have existed in the past also and it ended on sordid notes.

Nigeria had one of the most potent attacking force prior to the 2006 World Cup with players at the height of their careers in respectable European leagues. A shocker the nation would probably never forget was seen and a repeat of such would be more devastating.

There’s very little time to rehearse before the ultimate performance here but what these fans will not appreciate hearing are discordant tunes or a rehash of old errors.

Eguavoen has blessings all strewn around him, and there’s nowhere to hide. There’s no disguise.