Noni Madueke came on as a second half substitute but played his part in PSV’s 4-0 demolition of Danish champions, FC Copenhagen.

Copenhagen came into the game without their Nigerian imports, Akinkunmi Amoo and Paul Mukairu as their impressive first leg result was relinquished at home against the Dutch giants.

PSV’s Israeli attacker, Eran Zahavi scored his second and third goal in Europe this season in four games. He opened the floodgates in the 10th minute before former Bayern Munich and Borussia Dortmund midfielder Mario Gotze doubled the lead seven minutes before the break.

Zahavi scored the third and his second of the night in the 79th minute before Madueke, eligible for the Super Eagles, completed the rout in the first minute of the added time.

Madueke, 20, has been a revelation this season for PSV in the Eredivisie and in Europe.

In Alkmaar where AZ hosted Victor Boniface’s Bodo/Glimt, the Norwegians took the game to extra time before delivering a suckerpunch to end the Dutch team’s hopes of progression.

Bodo/Glimt had gotten a 2-1 win first leg win at home and fell to a 2-1 scoreline in the return leg too, a result enough to take the game to extra time. 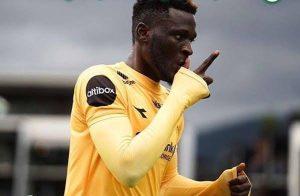 Boniface came on in the 91st minute for Runar Espejord and did enough to help the Norwegian champions to continue their fairytale run in European football.

It was Boniface’s fourth game in the Europa Conference League.