The dismissal of Gernot Rohr as the coach of the Super Eagles was greeted with excitement in Nigeria. According to fans’ perception, which was confirmed in the gradual decline suffered by the team under his watch, Rohr had far outspent his best years.

He ignored in-form players to settle for his known lieutenants who brought little to nothing to the team in his final days. While Rohr gave many opportunities to new players in the team, and invited many new faces, he was hardly courageous enough to have them compete for places on the team.

Rohr has since left but one of the victims of this disingenuous moves was Anthony Nwakaeme. Since Nigeria invited the former Hapoel Beer Sheva attacker in a dead-rubber World Cup playoffs against Algeria, he was never invited again, albeit unjustifiably. It’s time to correct that injustice by the new men in charge.

Other than that inconsequential game, which Nigeria went on to lose scandalously as a result of fielding an ineligible player, Nwakaeme’s impressive statistics in Turkey has seen national team handlers turn a blind eye.

Current Super Eagles coach, Austin Eguavoen in his defence of Ahmed Musa’s invitation said his presence in the team is honorary. As historically significant, yet morally inappropriate in sports as that sounded, that the coach ignored the most impressive Nigerian in the same league Musa plies his trade is somewhat inexcusable.

Nwakaeme is a journeyman. His career has been nomadic and has constantly had to prove a point at every turn of his long career. He’s proving another point again. Call him a late bloomer and you won’t be wrong but that he’s hot is also a cold fact.

In Trabzonspor, currently leading the Turkish Super Lig with an 18-point gap opened at the top, Nwakaeme has developed as arguably their most important player in the last four seasons. In his first season, he contributed 10 goals and 10 assists in 27 league games and the combination of his goal contributions has been the highest until now.

With injuries faced, and COVID-19 still a company of disappointment, the attacker has scored 11 goals this season and assisted 10 times in 23 games. In his last four, he has scored five goals and is easily one of Nigeria’s most lethal and complete attackers in European football. That he’s consistently ignored despite being the most consistent on paper beggars belief.

Nwakaeme has grown during the years, and has registered his name as a fans’ favourite for the Black Sea Storm. He was so revered that fans built a statue of him at the club to etch his immortality. At 32, he’s being tied to a new 3-year contract which may see him become the club’s highest earner. 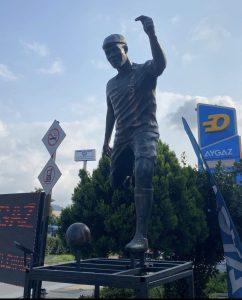 Numbers to the defense of an attacker

Statistics may sometimes give less than you want of a player, but it paints a picture of impact.

Football is developing so much that many scouts and selectors pick simply based on numbers, but that may be a dangerous road to ply.

However, when pictures also back statistics, then there’s a better basis for a good inference and that’s what Nwakaeme has shown. Numbers are always to his defense, but so are the little key details seen by the normal and technical eye.

With 21 goal contributions in the 23 games he has featured in this season, and with nine games left to the end of the campaign, Nwakaeme has beaten his personal best record with the club and has set a new one.

There’s no justifiable reason for his exclusion, not even his age. Nwakaeme has gotten better with age and his 7.50 average rating speaks volume of his form.

In the Turkish Super Lig this season, he has made the team of the week 7 times, with an average of 79 minutes per game.

He scores every 165 minutes with an average of almost a goal in every two games. He creates almost at an equal rate. His playmaking abilities as shown in his 10 assists this season is the highest of any Nigerian attacker in Europe. Only Sadiq Umar with 7 assists this season in 26 games comes close.

Nwakaeme also completes an average of 2.5 dribbles per game, and has created 14 big chaces this season, instructive of his ability to bring others into play. With his size and height enough to hold off defenders, Nwakaeme is a player many have openly stated, is difficult to handle.

His heatmap shows his area of prowess. He plays on the byline and cuts in with the overlapping full-back taking the space behind him. With an ability to shoot from range, especially in and around the final 18, and with great precision, he also has a strength not seen of most Super Eagles attackers at the moment.

While Rohr ignored Nwakaeme almost throughout his stay as the coach of the Super Eagles, it’s high time national team selectors cast their net wide again and invite a player who has always proven himself good enough.

Honour, although is due to whoever deserves it, but so is a chance to who has proven himself worthy of it.