Former Saarbrucken attacker, Jonathan Akpoborie has weighed in on the invitation of Odion Ighalo ahead of Union Berlin striker, Taiwo Awoniyi.

He said games like Nigeria against Ghana needs strength and Awoniyi offers more in that area than Ighalo. 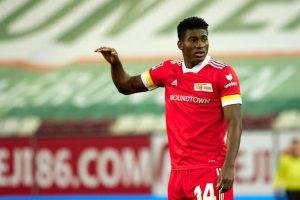 “Even though we do have a lot of attacking options, I do not have anything against Odion Ighalo being in the team but I believe in an African game like that where strength is needed, I don’t think he should be the person Nigeria should invite right now,” Akpoborie told Soccernet.

”The kind of Awoniyi should be in that team because those are the people that would use strength to accomplish what we want on the field of play.

“However, if you’ve been invited, the coach has seen something and that’s why he has invited all of these players. We wait and keep our fingers crossed and hope that we arrange ourselves very well for our team to do well.”