The two West African rivals will clash in a two-legged World Cup playoff in March, with the winner qualifying for the Qatar 2022 World Cup

Nigeria will host arch-rivals Ghana in the second leg of their highly anticipated 2022 FIFA World Cup playoff at the Moshood Abiola Stadium in Abuja.

Both Nigeria and Ghana finished top of their group in the second round of the CAF qualifying section. The two countries, along with the other eight group winners, qualified for the two-legged playoffs, which will determine Africa’s five representatives in Qatar.

The playoff draws were held last month, and it pitted Ghana against Nigeria, among other exciting matchups. Ghana will host the first leg in March, with Nigeria hosting the Black Stars for the return leg a few days later.

The Super Eagles played all of their group games in the second round of qualifying at the Teslim Balogun Stadium in Lagos, but Soccernet can confirm that the clash against Ghana will take place in Abuja. 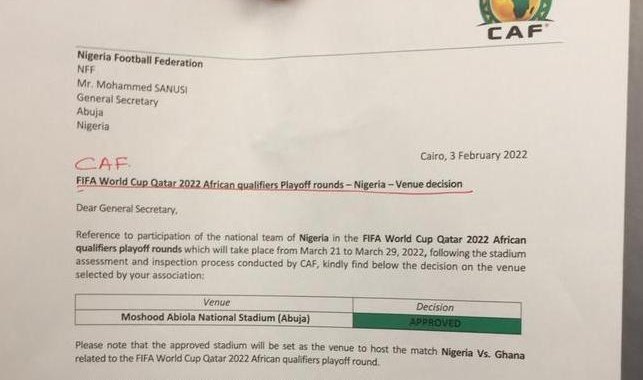 It’s the first time since 2014 the Super Eagles will play at the National Stadium Abuja, now known as the Moshood Abiola Stadium.

The three-time African champions have played World Cup qualifying games in the stadium before. The team played all their home qualifiers en route to the 2010 World Cup at the stadium.

Meanwhile, the Accra Sports Stadium will host the first leg after CAF denied Ghana’s request to move the game to Baba Yara.

The two games will take place between March 23-30, with the winner progressing to Qatar.