Watford manager Claudio Ranieri is receiving flaks from a section of Nigerian fans on social media who are displeased with the club’s handling of the Emmanuel Dennis situation.

Ranieri became public enemy number one for some Nigerians after Watford stopped Dennis from honouring an international invitation to be a part of the Super Eagles squad to the 2021 Africa Cup of Nations.

Dennis, who only joined Watford in the summer, has been the Hornets’ most outstanding star with his excellent attacking plays and a sharp eye for goal.

The 24-year-old has made 13 goal contributions (eight goals and five assists) in only 17 Premier League matches, the most of any player in the English top-flight, bar Liverpool’s Mohamed Salah.

Though influential at Watford, Dennis was a fringe player for the Super Eagles, having earned just two international caps since making his debut four years ago.

But injuries to Napoli’s Victor Osimhen and Genk’s Paul Onuachu pushed the Hornets’ number 25 up the pecking order and provisionally made him an essential for Nigeria at the Afcon.

And Ranieri initially resigned to losing Dennis to national duty during the Afcon period. Still, a silly administrative error from the Nigeria Football Federation allowed relegation-battling Watford to ‘bare fangs’ and keep hold of their star performer.

But some Super Eagles supporters are displeased with the actions of Watford and have vented their fury at Ranieri through a post on the club’s official Facebook page. 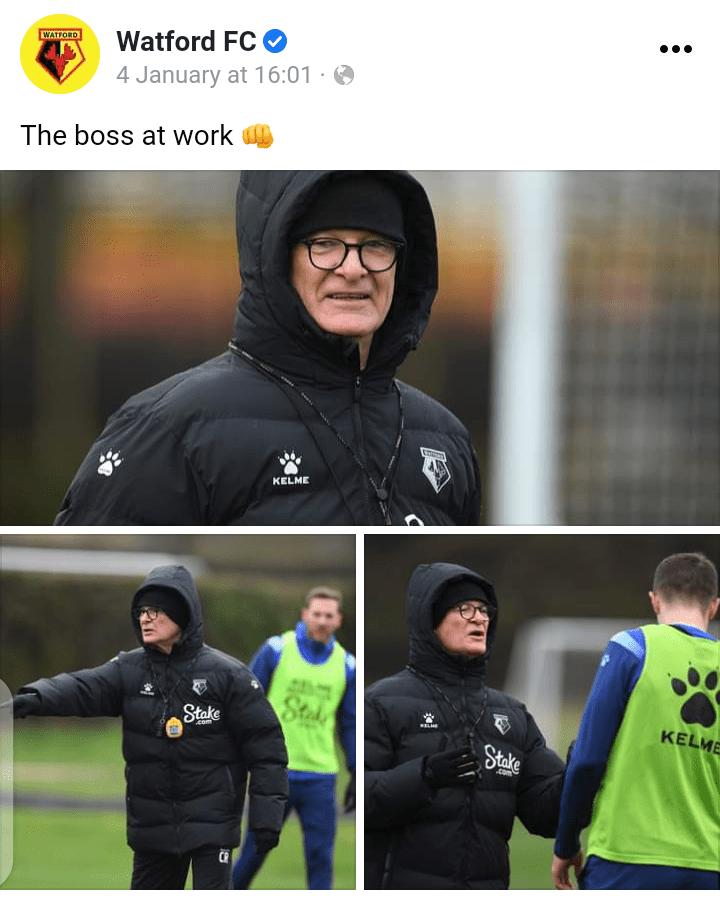 Below are a few of their ugly reactions on Facebook.

Bolaji Layeni: “The boss working on the ultimate goal, i.e., relegation to the championship.”

Collins Dennis Chidubem: *He is always at work but still fails.”

Philip Wonchi Timothy: “Training wouldn’t save you guys from relegation.”

William Emefiona: Championship is the way to go yo. It’s time to go home.

Olamiju Aduragbemi Teecode: “Working seriously to get Watford relegated.”
Precious Adedibu: “Soon to be the boss of the Championship.”

Onibiyo Uthman Uthi: “Work that will be fruitless.”

Prince Timothy ChukwuNazam: “No need for any training just go and sleep; the championship clubs are waiting for you to come back.”

Bolaji Layeni: “If u like train morning, afternoon, and night your relegation has already been signed and sealed. Yeye club.”

Anthony Adedigba: “Straight down to the English Championship. You have offended us in Africa.”

Ogie Victor Samuel: “My love for Maduka Okoye is just too much, it pains me he will not show his talent in the Premier League. Relegation has been confirmed.”

Ifeoluwa Egberanmwen: “That eyeglass just dey hungry me to break.”

Unique Emm An: “I love Ranieri but I do love Nigerians more. So championship it is Watford. Go and return back to Premier League no more.”

Aside from Dennis, there are at least four other Nigerian players associated with the Hornets. Isaac Success and Tom Dele-Bashiru, who are presently on loan at Udinese and Reading, are still on the payroll of Watford.

Meanwhile, Dennis has clinched both Watford’s Player of the Month and Goal of the Month awards, following a string of excellent performances in December.