Photos: Super Eagles first training in Cameroon ahead of AFCON 2021 opener against Egypt

The three-time African champions landed in Cameroon on Thursday ahead of the 2021 Africa Cup of Nations, starting on Sunday

Nigeria’s Super Eagles held their first training in Garoua, where they will play all their three group games in the 2021 AFCON.

The three-time AFCON champions landed in the city on Thursday morning and had their first training session later in the day.

The training took place at the VSTS-Annex of Roumde Adjo Stadium, Garoua, Cameroon, and players looked in high spirits. 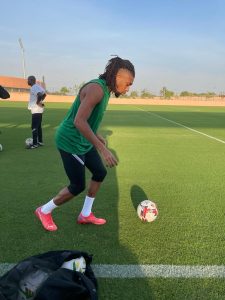 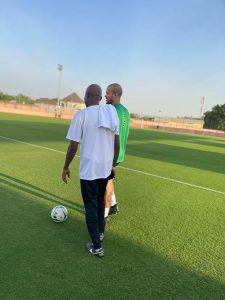 The team will have another training session today (Friday) ahead of their Tuesday Group D opener against seven-time champions Egypt.

Twenty-five out of the 28 players called up are already in camp, but the number has reduced to 27 after Odion Ighalo was dropped.

The two players yet to join the squad are Tyronne Ebuehi and Jamilu Collins, but both are expected to arrive in Cameroon on Friday.

Ebuehi’s arrival was delayed after Venezia included him in their matchday squad for their Serie A clash against Salernitana. However, the match did not hold due to a Covid-19 outbreak in the Garnets’ team.

The reason for Collins’ late arrival is not known, but he is expected to join the team on Friday.

Nigeria will also take on Sudan and Guinea-Bissau in their group matches.