Arsenal and England legend Ian Wright was left stunned by the sheer quality of Kelechi Iheanacho’s winning goal for Nigeria in their Group D faceoff against Egypt at the ongoing 2021 Africa Cup of Nations in Cameroon.

Liverpool’s Mohamed Salah was the centre of attention ahead of the clash of the titans between the two former champions.

But most of the highlights of the entertaining encounter inside the Roumdé Adjia Stadium in Garoua had Nigerian stars Moses Simon, Taiwo Awoniyi, Joe Aribo, and Kelechi Iheanacho.

The match’s true moment of world-class quality, however, came off the boots of the Leicester City ace in the 30th minute. 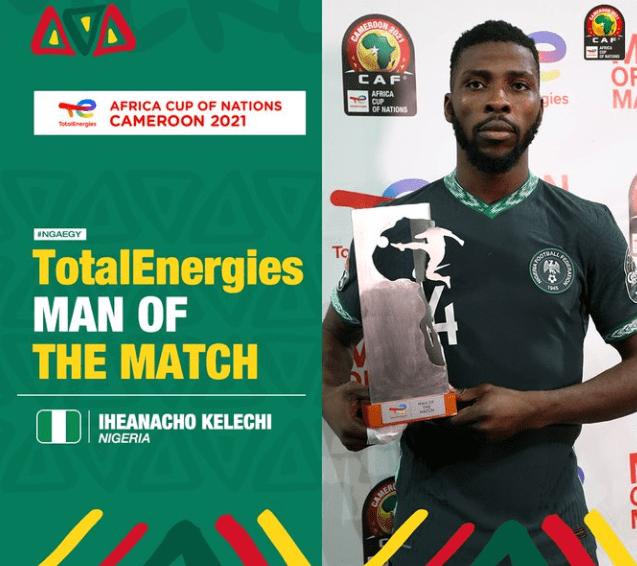 Simon got the better of his marker down the left flank, for the umpteenth time, before sending a cross into the Egyptian box. The half-cleared cross came back to Aribo at the edge, and the Rangers man duly nodded it back in to Iheanacho.

The ex-Manchester City attacker cushioned the headed pass before he hammered a left-footed half-volley beyond the flailing arms of goalkeeper El Shewany and into the top corner.

It was a genuinely classy goal worthy of winning any top-of-the-bill clash, and it was little wonder that it got the attention of one of English football’s most prolific strikers.

Arsenal’s record goalscorer before Thierry Henry shattered them all, Wright knows a thing or two about scoring goals.

And the 2005 English Football Hall of Famer was particularly impressed with the technique deployed by Iheanacho in executing his goal.

Iheanacho would have the chance to add to his goal tally when Nigeria take on Sudan on Saturday, January 15.