The three-time African champions have finally named their squad for the 2021 Africa Cup of Nations, which kicks off on January 9

Both Kelechi Nwakali and Sadiq Umar will be hoping to make their debuts in the tournament, while Awoniyi and Dennis have been rewarded for their good form this season.

Awoniyi earned his only cap as a sub in the 1-0 loss to the Central African Republic last October. Meanwhile, Dennis has not played for the team since the 0-0 draw against Sierra Leone last year.

However, both players are back in the squad after a brilliant start to the season at their respective clubs. Awoniyi has scored 14 goals and recorded three assists in 27 games for Union Berlin this season.

At the same time, Dennis has had a brilliant start to life at Vicarage Road, with seven goals and five assists in 15 league games for Watford.

But there’s no place for Venezia’s Tyronne Ebuehi, although Olisa Ndah of Orlando Pirates got his maiden call-up to the team. 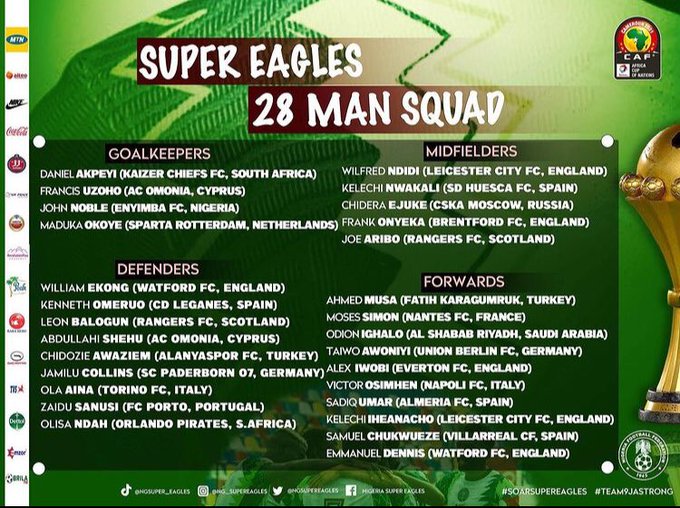 There’s also a spot for one player from the Nigeria Professional Football League (NPFL), and that’s John Noble of Enyimba.

The Super Eagles begin their AFCON Campaign with a clash against the Pharaohs of Egypt on January 11.