Libya down, Equatorial Guinea must fall on Tuesday – Salisu 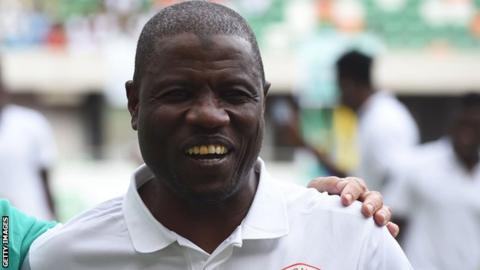 Despite overcoming Libya 1-0 in Friday’s Africa Nations Championship in Morocco, Head Coach of the Home Based Super Eagles,  Salisu Yusuf has admitted that the Libyans were a tougher opponent for Nigeria and disclosed that they are already planning the downfall of Equatorial Guinea in their last group match.

The team scored the deserved goal through Sunday Faleye in the 79th minutes from Osas Okoro’s corner kick to lead the group on four points after drawing Rwanda goalless in their opening match.

However, Salisu revealed to cafonline.com that they are already focusing on neutralising and mauling ‘pointless’ Equatorial Guinea in their last group C match to qualify for the knockout stages of the CHAN tournament.

“It was a very difficult victory. We faced a very good team in Libya, who created a lot of problems on the ground. Our opponents were more comfortable than we, backed by their victory against Equatorial Guinea in their opening match.

“We advocated a strategy to close spaces. We studied the Libyan team. We changed our strategy compared to the first match. We are already thinking about the next match against Equatorial Guinea. Our goal is to win the remaining match to stay here in Tangiers”.