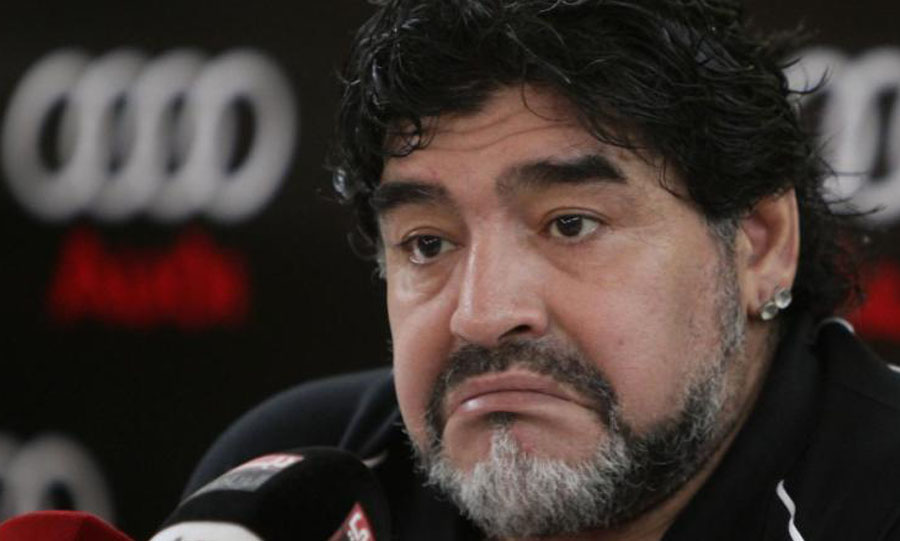 Argentina legend, Diego Maradona has stated his desire to return as La Albiceleste coach after Tuesday’s 4-2 defeat to the Super Eagles of Nigeria in an international friendly in Krasnodar, Russia.‎

Despite taking a 2-0 lead in the first half through goals from Ever Banega and Sergio Aguero, the Super Eagles rallied back to win 4-2 with goals from Kelechi Iheanacho, Bryan Idowu and Alex Iwobi (brace).

According to espn.com, Maradona, who led his country to World Cup glory in 1986 and also led them as coach to the 2010 World Cup, published a comparative table on his Instagram account showing that his period as a coach of the team had the highest efficiency among all the managers that led Argentina since the 1970s.

In the graphic posted, Maradona claimed he achieved 75 per cent efficiency, with 18 victories and six defeats in 24 matches during his tenure as Argentina coach, including the World Cup in South Africa, a tournament in which his team was eliminated in the quarterfinals.

In second place is Gerardo Martino, who appears with 74 per cent in 29 games. Then Alejandro Sabella, runner-up in Brazil 2014, with 72 per cent in 41 games, Alfio Basile and Marcelo Bielsa, both with 70 per cent in 48 and 68 games, respectively.
And commenting on the result, the legendary Napoli player wrote on his account: “Who wins more ?? Let’s draw our conclusions, I’m mad because they give away our prestige, but the players are not the ones to blame, I WANT TO RETURN !!!”

It would be recalled that Maradona was in charge when Argentina piped Nigeria 1-0 in the group stage of the 2010 World Cup in South Africa.

He was also in action when Argentina came from a goal down to beat Nigeria 2-1 in the group stage of the USA 1994 World Cup, having a hand in two of the goals scored by Claudio Caniggia.

Meanwhile, a former Argentine football official committed suicide Tuesday, the same day he was accused of bribe-taking in the Fifa corruption trial that opened in New York this week, Argentine media reported.

Jorge Delhon threw himself under a train in a Buenos Aires suburb on Tuesday, the newspapers Clarin and La Nacion reported on their websites.

A sports marketing executive, Alejandro Burzaco, testified Tuesday that Delhon and another man, Pablo Paladino, took in millions of dollars in bribes in exchange for rights to broadcast football games, according to the reports.

The reports said that at the time the two men worked for Football for All, a government program under former president Cristina Kirchner that held the rights to football broadcasts in Argentina.

Burzaco, the former chairman of Torneos y Competencias S.A., detailed in US federal court in New York how his company paid millions of dollars in bribes to South American Football Confederation (Conmebol) executives for more than a decade to secure television rights to major tournaments.

Burzaco, who pleaded guilty in November 2015 to racketeering, wire fraud and money laundering conspiracies, is one of 42 officials and marketing executives indicted in the Fifa scandal.