The Super Eagles take on South Africa in the first match of the African Nations Cup qualifiers in Nigeria. Both teams are in camp preparing ahead of the games as South Africa intensifies their training programs in order to shock Nigeria at home.
The Super Eagles are favourite going into the tie despite the absence of star duo of Victor Moses and Skipper John Obi Mikel both of who got the goals for Nigeria in the 3-1 defeat of the Desert Foxes of Algeria last year in Uyo.
The Eagles camp is bubbling with some exciting talent ahead of the clash as we throw some light as regards to the players who could set the pace for the Eagles against South Africa. The Nigerian side has some individual who can rise up to the occasion as they will be counted upon by their Coach Rohr.
We take a look at Super Eagles players capable of doing the damage at the weekend against the visiting side South Africa.

The Leicester City defensive midfielder have risen in his strides in recent times as he scored the best goal in Belgium with KRC Genk last season from a superb volley outside the box before moving to join Leicester City in January.

The absence of John Obi Mikel creates more room for the young lad to feature in the Eagles midfield alongside stand-in skipper Ogenyi Onazi. His presence and midfield awareness is spot on and his range of passing and shooting is awesome and the Coach will be counting on those qualities against South Africa.
He will be expected to partner Onazi in the double midfield pivot as they attempt to shield the Eagles back four from any imminent danger from the visitors attack. 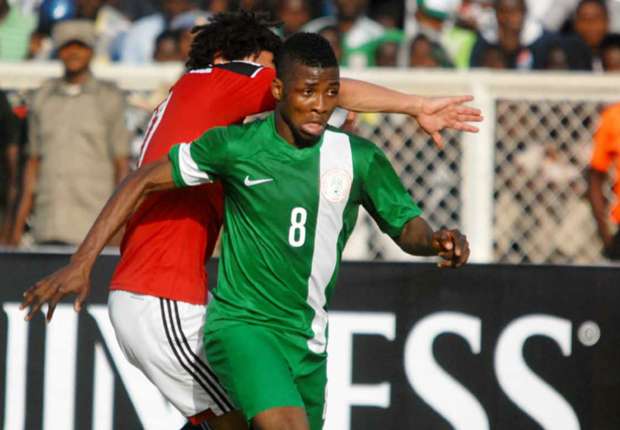 The Manchester City forward will be one of the key men going into the game for Nigeria. The young Prodigy has been impressive on the green and white shirts scoring 7 goals out of 10 Super Eagles appearances.
The last of these goals came recently when they defeated Togo 3-0 in an International friendly with Leicester City forward Ahmed Musa also getting a brace.
His impressive form have also continued in training as he scored in the practice match that ended 1 goal apiece where he cancelled out Henry Onyekuru strike in a test game. His ability on the ball and composure in front of goal makes him a danger man and a Super Eagle reliable against the South African side.

The Arsenal prospect likely be making his International debut in a competitive game against South Africa at just 20 and looking promising after his positive performance in training where he was on the score sheet alongside Kelechi Iheanacho in the test game.
The forward turned 20 few days ago and will be looking forward to announce himself on the International scene with a debut goal.
His countenances including the Coach Gernot Rohr will be hoping that the forward produces the goods against the visitors when he steps onto the pitch as his quality have been awesome and worthy of admiration since his involvement in the National team and Nigerians can-t wait to unleash the young prodigy as a venom against the Bafana Bafana of South Africa.

The last but not the least is the midfield stalwart and sprinter dubbed by a section of the Nigerian media as the Nigerian Pogba. That alone speaks much about the Portuguese based attacker who is attracting several interests in some of the best teams across Europe.
The attacking style and the guile of the playmaker that can fit him in several positions in the Super Eagles team is what make him a superlative performer for the Eagles.
The young forward has an eye for goal as he scored in his official debut for the Eagles against Egypt in Kaduna back in March 2016. He announced himself on the global scene where he notched 4 goals past Japan in the 5-4 win at the Olympic games in Rio to outline his credentials.
Much will be expected from the midfielder as his pace and trickery evident in the African U23 qualifying Championship in Dakar, Senegal in December 2015 will come into play as Eagles face Bafana Bafana at the weekend in Uyo, Akwa Ibom Stadium.
Tags: AFCONFeaturesNewsNigeriaSuper Eagles