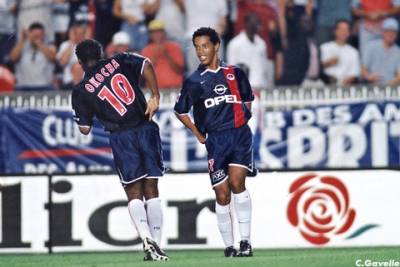 Nigeria’s Augustine ‘Jay-Jay’ Okocha is one of the only no.10s that Brazilian legend Ronaldinho admired during his career.

The former Super Eagles playmaker wore the number 10 jersey at Paris Saint-Germain when Ronaldinho arrived at the club to begin his European career in 2001. The Brazilian was given the number 21 jersey.

Ronaldinho went on to become one of the most famous number 10s in the modern era, winning the World Player of the Year award twice as well as the World Cup, UEFA Champions League and numerous other titles.

Yet he has revealed that Jay-Jay Okocha is one of the only other no.10s that he admired, with the Nigerian playing an important role in guiding Ronaldinho as a youngster.

Ronaldinho posted a picture of himself with Okocha and Colombian legend Carlos Valderrama on Instagram and wrote: “So camisa 10 que sempre admirei. Jay-Jay Okocha e @pibevalderramap.”

This translates to: “The only other number 10 jerseys that I admired. Jay-Jay Okocha and Valderrama.”