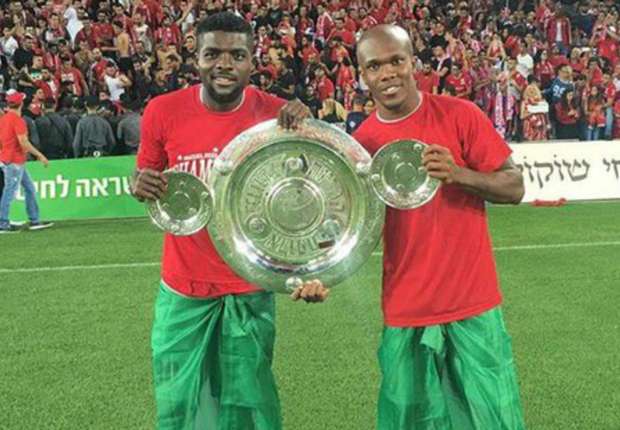 Nigerian duo of John Ogu and Anthony Nwakaemehave won the Israeli Premier League with Hapoel Beer Sheva in their 3-1 victory against Bnei Sakhnin in the last game of the season.

The club ended a 40-year wait to win the title for a third time. Firas Mugrabi put Sakhnin ahead six minutes into the match; Maor Bar Buzaglo levelled scores for Beer Sheva in the 16th minute. Maor Melikson extended the lead for the home team in the 40th minute, while Ben Sahar put the icing on the cake in the 77th minute; as the game ended 3-1at full time.

Beersheba won back-to-back titles in 1975 and 1976 and Saturday’s achievement ended Maccabi Tel Aviv’s grip on the trophy for the past three seasons. Maccabi, who finished as runners-up, two points behind Beersheba, crushed Maccabi Haifa 6-0 at home in a dress rehearsal of Tuesday’s State Cup final, which will bring the season to a close.

Beersheba will contest the preliminary rounds of next season’s Champions League. Maccabi Tel Aviv, third-placed Beitar Jerusalem, and Maccabi Haifa who finished in fourth place, will play in the preliminary stages of the Europa League.

Maccabi Netanya and Hapoel Acre were relegated to the second division and Ashdod SC and Hapoel Ashkelon earned promotion to the top flight. Ogu who recently won the best foreign player in Israel award, added the league title to his collections of awards this season, and more importantly. The midfielder is expecting his first child in space of months; which is another crowning glory for the player.