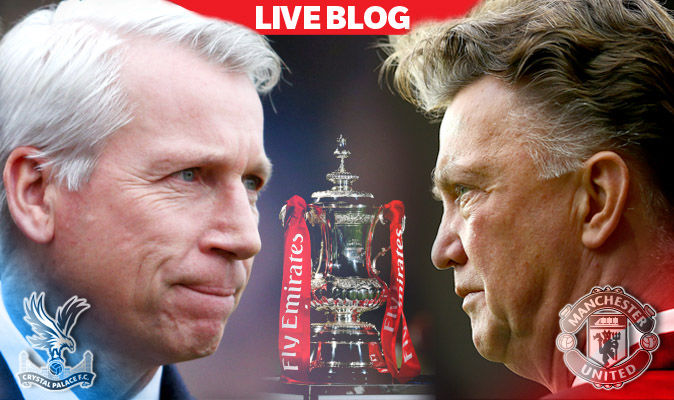 Louis Van Gaal lead his boys to Wembley in what could be his last act as Manchester United coach with Jose Mourinho’s name lurking around.

For both manager the showpiece final has plenty riding on it. Alan Pardew, part of the 1990 team that fell to Manchester United in their only other cup final, can etch himself even more firmly into Palace folklore if he claims his club’s most significant trophy. After a frustrating league run in 2016 victory at Wembley would sooth the disappointment of recent months.

Louis van Gaal may well be about to manage his final match for Manchester United, as the spectre of Jose Mourinho lurks over England’s fifth-placed side. Whether vice-chairman Ed Woodward will bow to supporters’ demands or not three years on from the departure of Sir Alex Ferguson the pressure to win a major trophy is mounting around Old Trafford.

United’s preparation for the final may have been disrupted by Sunday’s bomb scare, which saw their final Premier League game of the season postponed to Tuesday, but they remain odds-on favourites to win their 12th FA Cup. Will they emerge victorious or will it be Palace fans partying down Wembley Way?

106′ ET KICKOFF:Crystal Palace get us back underway for the second period of extra time looking to make the most of their numerical advantage in the coming 15 minutes. Can they do it, or will United hold out?

91′ ET KICKOFF: Manchester United get us back underway for extra time in this FA Cup final!

66′ MAN UTD SUB: Rojo will not be able to carry on here as he limps off to be replaced by Matteo Darmian.

61′ OFF THE POST!United are denied by the woodwork once again here! This time it is Martial who comes within the width of the post of breaking the deadlock, flicking a good header from Valencia’s cross against the upright. Another escape for Palace!

53′ OFF THE POST!United are inches away from taking the lead! It is the closest we have come to a goal so far as Fellaini collects Rashford’s flick before powering an effort towards goal that smashes against the post!

46′ KICKOFF:Manchester United get us underway forthis second half as both they and Crystal Palace look to break the deadlock and win the FA Cup in the coming 45 minutes.

40′ YELLOW CARD!…and Rojo goes into the book for that pull on Ward.

33′ CHANCE! Big block from Ward to deny United the opener! Rashford does well down the right flank to skip away from Delaney before picking out Martial at the backpost. The Frenchman goes for goal first time, but Ward throws himself in the way of the shot.

18′ YELLOW CARD! Controversy here as Smalling finds himself in a foot race with Wickham before dragging the Palace man down. Wickham is quickly up and moves inside before finishing it into the bottom corner, but Mark Clattenburg had already blown the whistle. He shows a yellow card to Smalling, but the referee should have played advantage there.

11′ CHANCE! The first hint of a chance in this FA Cup final falls to Manchester United, who have had a lot of corners already. That is where this opening comes from as Fellaini attacks the ball, but he can’t get enough on his header to test the keeper under good pressure from Jedinak.