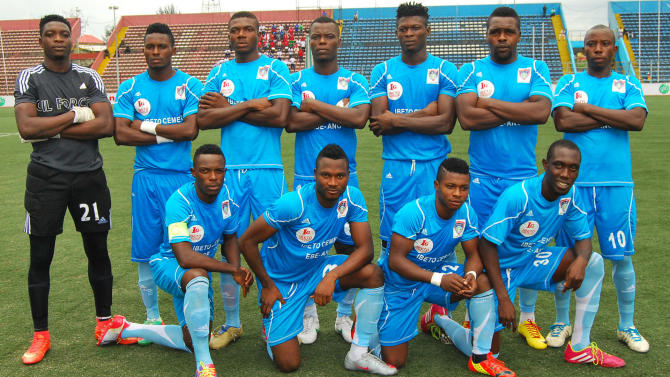 After conceding the top spot as a result of the draw with Mountain of Fire and Miracle mid-week, Enugu Rangers will this weekend try recapture their top position as the Flying Antelopes host IfeayinUbah at the Nnamdi Azikiwe Stadiun, Enugu in a top of the table battle clash.

Rangers were looking good for the three points at stage against MFM after Obinna Nwobodo shot theminto the lead in the 36 minute before Stephen Odey’s 68 minute volley rescued a point for the home lad.

However, In Nnewi, FC Ifeanyiubah shot to the top of the Nigeria Premier Football League after beating Plateau United 1-0 through Pascal Seka’s goal from the spot after 18 minutes of play.

The Nnewi club now have 18 points, one more than Rangers in second place.It is therefore a big opportunity for the Imama Amapakabo led Enugu outfit to return to the summit of the NPFL log this weekend.

“Enugu Rangers are a good side and you can’t take that away from them. They’ve got a good coach and a good squad,” MFN Coach Fidelis Ilechukwu said after his side’s draw with Rangers on Wednesday.

It would be recalled that Amapakabo had vowed to end Rangers title draught this season.

“The objective is clear to everyone involved with this club that we are gunning for the big prize (title). From the players to the coaches to the fans everyone knows that this is one of the few remaining traditional clubs in the country. We want to win the title but we know it will require a lot of hard work,” he had said.

An encounter with IfeayinUbah is indeed a real test for Rangers Title ambition.
[post_ad]