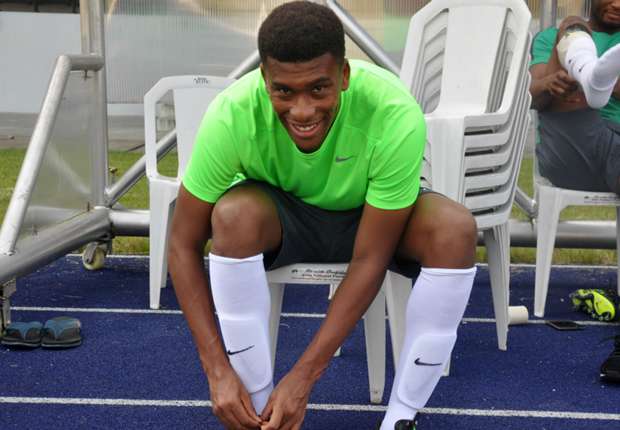 In-form Arsenal whiz kid, Alex Iwobi, may miss the Rio 2016 Olympics as the Premier League giants are planning to have a full complement of their players when the new season kicks off.
Reports claimed the north London club pride the Nigerian and are prepared to fence him off from the Olympics.
Though the player has indicated his readiness to feature for Nigeria at the Olympics, but Arsenal are not under any obligation to release him since the Games is not a FIFA tournament.
The 19-year-old has been hugely impressive in the last month, scoring twice in four games and adding an assist, as well as impressing against Barcelona in the Champions League.
The midfielder has been described as “something special” by Gunners boss, Arsene Wenger, with the Frenchman saying he “didn’t expect that level of efficiency or impact” so quickly from the teenager.
The Olympic football tournament is due to start on August 3, just 10 days before the scheduled start of the the Premier League next season on August 13.
Nigeria will at least be involved until August 10, playing three group games in that time.
If Samson Siasa’s team make it all the way to the final, Iwobi would be out of action until August 20, not to mention having spent almost a month away from Arsenal and pre-season training.
On his choosing to represent Nigeria, the country of his birth, over England, Iwobi added: “I do not have any regrets whatsoever in opting to play for Nigeria and will always do my best whenever I put on the green white green colours of Nigeria.
“I hope to be involved in the forthcoming World Cup qualifiers too. Nigeria is a great footballing nation and deserves to assume her rightful place in Africa and world football and I am keen to be part of a team that achieves this goal.”[post_ad]