What We Learnt From The Arsenal, Barcelona Match

By: Obiweluozo Martins On the eve of a titanic clash between English side Arsenal and Spanish heavyweights and current Champions league holders Barcelona, a euphoria of intrigues and enthusiasm ensued as both sides was willing to outdo each other in the battle field. With the Gunners overcoming Dynamo Zagreb and Olympiakos to set up a match with the Catalan giants, expectedly fireworks were expected on the field of play. When two elephants fights, it is the grass that suffers, such was the Emirate turf as it suffered and felt the pain of Arsenal fan and players as Lionel Messi converted from the penalty spot to give Barcelona a clinching victory. With the first leg gone and with Barcelona claiming a 2-0 away win courtesy of their usual talisman Lionel Messi, we take into consideration what might have affected the course of the game in the entire 90minutes of action. SoccerNet Nigeria looks at the lessons we learnt from the Arsenal/Barcelona encounter.ARSENAL FAILED TO CONVERT THEIR CHANCES. 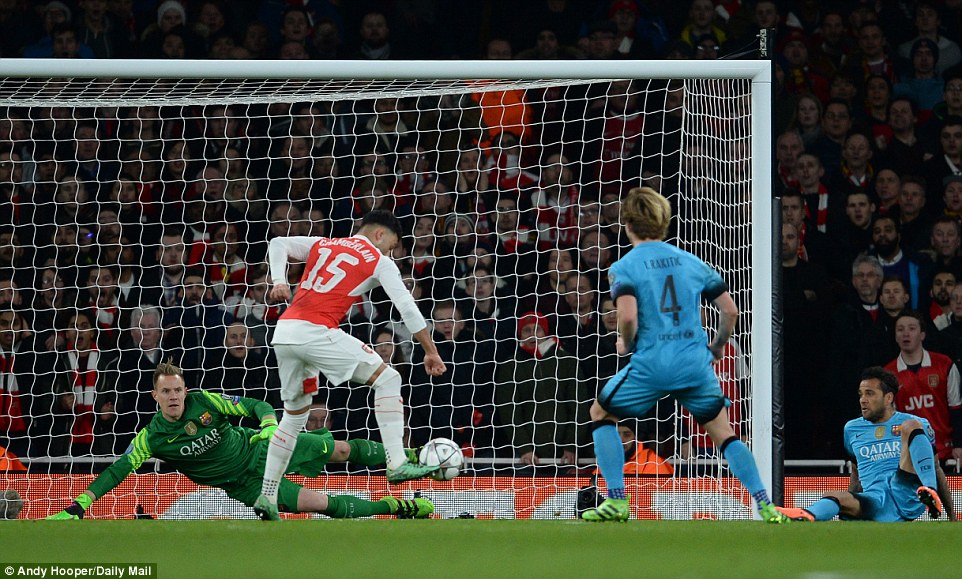 In this high profile and technical game between two sides which is considered among the Europe’s finest, quality and class were widely expected and also fans and the media for the game, among the both sides it was the Gunners widely known as Arsenal who refused to deliver the killer punch against their opponent Barcelona. They fluffed their chances yet again just like they did with the championship side Hull City.Even with the creativity coming from the channels and in midfield from silky Alexis Sanchez, playmaker Mesut Ozil and youngster Hector Bellerin Arsenal’s forward line failed to come to the party and kill off the dangerous Barcelona with Olivier Giroud and Oxlade-Chamberlain in particular the main culprit. The English forward fluffed his chances from almost six yards thus causing Arsenal to be needing divine intervention to qualify as Barcelona converted theirs through Lionel Messi from a swift counter-attacking move lead by the ever dependable Neymar Jnr.LIONEL MESSI’S MOMENT OF CALMNESS/COMPOSURE.It was a goal that defines quality and class under pressure. The Ballon D’Or winner silenced the Emirates Stadium with a swift effort forcing Petr Cech to the ground and firing home with conviction into a helpless empty net. It was a goal made from a triangular counter attacking more in a predatory fashion as Neymar picked up a loose ball link up to Suarez who returned with a closer back heel to on move Neymar who square on the onrushing danger man Lionel Messi who was unmarked and made no mistake in taking a touch of calmness and composure to get Petr Cech in exemplary fashion, thus ending a barren run in front of goal against the former Chelsea Veteran Shot stopper.The replay shows the class and composure that defines the world class talent in the one and only Lionel Messi.SO MUCH QUALITY ON DISPLAY.The two sides showed so much class irrespective of the fact that Arsenal failed to score. The Gunners themselves had a good moment especially with swift and tender runs from the youthful Bellerin at the right back position which was full of confidence and conviction. The likes of Neymar wowed in front of Arsenal’s final third in attempt to link up with strike partner Luis Suarez.On Occasion Lionel Messi proved his world best Status as he drew foul and completed dribbling with a cross field pass from his special left foot following suit. The ease with which he nutmegged Arsenal center half Laurent Koscielny left Arsenal fans panting as the resultant free kick was close and daring which was just in front of the half circle just behind the 18yard box .Iniesta was just showing why he is a veteran of the UEFA Champions League with his touch and maturity on the ball as he handled the ball with fathers care. On the other hand Mesut Ozil was at it and his Arsenal teammates especially the forwards line will have themselves to blame as they failed to convert thereby denying the former Real Madrid star (Ozil) an assist which should have been a good reward for such a good game of articulation he had. Alexis Sanchez was good on the night as his quality kept the likes of Ivan Rakitic and Sergio Busquets from joining the attack with contempt.BARCELONA CONTINUES DOMINANCE OVER ARSENAL.Barcelona made it a task for the Gunners at the Nou Camp. With two unreplied away goals, it is hard for Arsenal not to concede defeat and dominance over Barcelona following a brace from Lionel Messi in the 71 and 84th minute of the game. It was a 90minutes Arsenal were reminded that FC Barcelona of Spain hold an edge over them (Arsenal) when it comes to the European game like in the Champions League. It is hard to take but that is the reality as Arsenal fans who came to cheer their team were returning home to their various destination with a feeling of dejection. It was simply a dominance which Barcelona have enforced on Arsenal and until the Gunners rise from their shackles Barcelona’s dominance over them might not be anytime soon especially with the three wise men in the person of Neymar Jnr, Suarez and Messi, a combination also ready to devour teams with Arsenal in focus bearing in mind about the upcoming return leg at the intimidating Nou Camp. [post_ad]