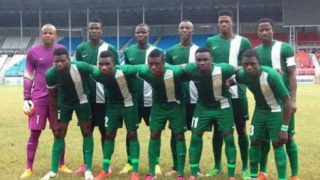 The Nigeria Football Federation and the Confederacao Brasileira de Futebol have confirmed that their U-23 squads will play an international friendly match in Brazil on March 24.

“The CBF is happy to host the champions of Africa, Nigeria Olympic team on the 24th March FIFA date at 7pm at the stadium of Kleber Andrade in the city of Cariacica, Vitoria, Espirito Santo. The match will serve as preparation for both teams for their participation in the Olympic Games Rio 2016,” the statement from CBF read.

NFF’s FIFA Match Agent, Jairo Pachon of Eurodata Sport, said: “The match is sealed. We are happy to be able to swing this one and it will serve as good preparation for the Nigeria Olympic team ahead of Rio 2016.”

Both teams were involved in one of the most memorable matches in the history of the men’s football tournament of the Olympics, back in 1996, when the Dream Team came back from 1-3 down to eliminate Brazil in the semi finals.

Meanwhile, Coach Samson Siasia has listed a total of 30 players for the international friendly match against Brazil coming up towards the end of next month.

Siasia on Friday said: “For now, I want to assume that I don’t have a team, as every Nigerian player within the age bracket that is good gets a chance to fight for a place in my team to the Olympics. I intend to use friendly games like this to try out as many players as I can, so that as we get closer to the games I will have a mental picture of the players I will be taking for my final training camp before the Games.

“For now, I invited this large number of players because I know not all of them will be able to make it even though we have sent out invitation letters to all of them. My major concern now is for them to come with letters from their clubs indicating that if they are eventually selected for the Games, their clubs will allow them report to camp when needed.”

Siasia added that as a lot of overseas-based players have shown interest in playing for the country at the Olympics, he intends to utilize all FIFA free windows so as to enable him and his assistants assess as many of them as possible.

“For now, we are concentrating on those players we have no picture of how they will adapt to our playing pattern.‎ We intend to invite more of such players as we go ahead. We already know some of the overseas-based pros we intend to work with, so we will be inviting those known faces as we progress in our build up to the Games.”

With Siasia now moved up to the Super Eagles, Fatai Amao will tinker the U-23 in the interim.