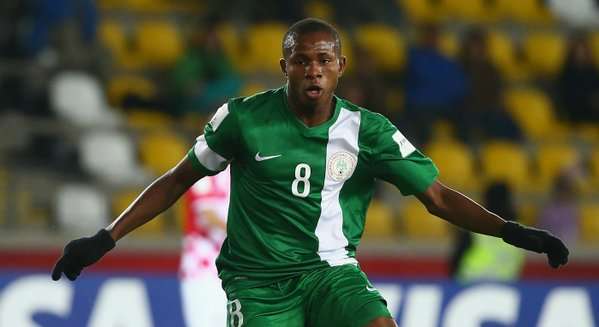 Nigerian wonderkid Samuel Chukwueze was due to undergo his medical with Arsenal on Tuesday afternoon and is expected to sign a four-year deal with the North London club, according to the Daily Star.

Chukwueze caught the eye of Arsenal scouts after playing a key role in helping the Nigeria Under-17′s win with World Cup in Chile last year and he’s been strongly linked with a move to the Emirates in recent months.

Reports [via Daily Star] in January suggested that the 16-year-old had agreed to move to North London as part of a £4m double deal that also involved international team-mate Kelechi Nwakali.

Nwakali wrapped-up his move to Arsenal three weeks ago but Chukwueze was only granted permission to fly in to London on Monday night after finally receiving his visa and international clearance.

The teenager confirmed the move yesterday and says he’s joining Arsenal as he believes he’ll be given a fair chance of breaking in to the first team. He was quoted by the Daily Star as saying yesterday:

“My trip to London is on Monday night,”

“I’m happy that everything is going well and I will do my best when I get there by the grace of God.”
“Arsenal as you well know are a very good club and it will be good for my career since I will be able to learn many new things,”

“I like Arsenal because they are a club who give young players the opportunity to showcase their talents and I believe I would be given the chance to play too.”

It appears the move is now edging closer to completion with theDaily Starreporting today that Chukwueze was due to undergo his medical in North London on Monday afternoon.

There has been no further update on how the medical went but as long as there were no complications, the newspaper says the attacker will then sign a four-year deal – but he can’t pen his professional contract until he turns 18 next year.

Nothing official has come out from Arsenal as yet but it does appear that we’re on the verge of wrapping up a deal for this exciting youngster and it will be interesting to see how he, and compatriot Nwakali, settle in England.

Chukwueze arrives with a reputation as being one of the hottest young talents in Nigeria and it will be intriguing to see where the Arsenal coaching staff see his future as he’s capable of playing anywhere across the front three positions.