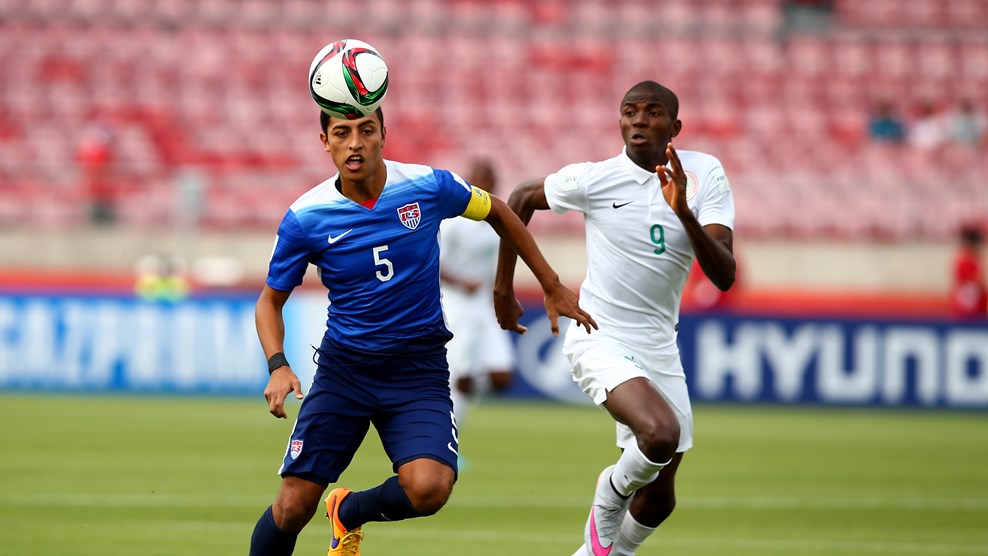 The Golden Eaglets on Sunday arrived the iconic city of Vina del Mar ahead of their FIFAU-17 World Cup Chile 2015 second Group A match against the host country, Chile at the Estadio Sausalito on Tuesday.

Only on Saturday, Nigeria jumped to the top of the section with the maximum three points after grinding a 2-0 win over the USA while Chile and Croatia shared the spoils after a I-1 draw.

The Eaglets, upon their arrival at Vina del Mar swiftly began their preparation on Sunday evening with their first training session at Municipality Sport Sausalito where Coach Emmanuel Amuneke yet again made a clarion call to the players.

“Once again, we want to congratulate you for a good job done on Saturday against USA but we still have a long way to go,” noted the 1994 African Player of the Year. ” To win the World Cup, a team must play seven matches and as such, we must not get carried away and be complacent because we beat the USA.”

Amuneke warned that the match against the host would be a different ball game since it is a must win for them to be in contention for the knockout stages. He maintained that the players must gird their loins to rumble against the hosts who would play yet again in front of their partisan fans.

He explained: “The match against Chile would be tougher and we want to approach the match with seriousness and high sense of responsibility. We have to be focused because there would be no margin for errors against Chileon Tuesday.”

The Golden Eaglets will have a feel of the Sausalito Stadium on Monday as mandated by the rules and regulations guiding the championship.

In a related development, Mr. Tiwalade Adelanwa, Charge d’Affaires at the Nigeria Embassy in Argentina who saw Nigeria beat USA 2-0 on Saturday, has equally charged the Golden Eaglets to remain focused.

“This is the third time I’m watching our boys play and I’m impressed with their discipline and tactical approach against Argentina, Racing Club and today, against USA,” said the diplomat. “They stand a good chance if they can show the same discipline against Chileon Tuesday.”

The clash between the Golden Eaglets and Chile will kick off at midnight on Tuesday in Nigeria (8pm Chile time).