Why Rafinha Is So Important To Barcelona

First and Furemost all FC Barcelona players are important to the team, because the team is incomplete without one of them. But there are some players who serve as backbone or pillar to the team and Rafinha Alcantara is one of them. 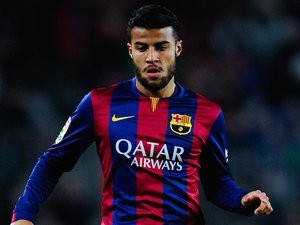 This is just our own point of view, And at Flybarca we are not perfect, anything you it’s not right you can let us know in the comment box.

Rafinha is a player who also graduated from Barcelona’s youth academy, who joined barcelona’s youth ranks at the age of 13. After he extended his contract with Barcelona on the 27th of June, 2013, few weeks later, he was loaned to Celta Vigo, for the 2013/2014 Season where he worked under barcelona’s current manager Luis Enrique and he made 32 apperances scoring four goals for the team. At the end of the 2013/2014 season at Celta vigo, he won La Liga Breakthrough player of the year.

When he returned from Celta Vigo and had to work under Luis Enrique at Barcelona. The former Celta vigo boss who is now managing Barcelona already knows his quality and Rafinha made his debut for Barcelona at Camp Nou in Luis Enrique’s first match in charge, he had the opportunity to show what he had only in the first half of the match where Barca eventually had a 3-0 win over Elche FC.

Despite the 2014/2015 season when Barcelona had the likes of Xavi Hernandez, Andres Iniesta, Ivan Rakitic, Sergio Busquets, the 22 year old still had the chance to feature 36 times for Barcelona recording two goals with a 19 starter and used as a substitute 17 times, he also recorded a great number of assists 10 in La Liga, 2 in the Champions League, and 7 in the Copa del rey which sums up to a total of 19 assists.

From the players recently promoted to the senior team the likes of Munir, Sandro Ramirez, Segio Roberto, Rafinha Alcantara. As for Munir and Sandro Ramirez who are strikers are still yet to get a place in the starting line-up, unlike Rafinha who is an attacking midfielder from the scratch is been used by Enrique as a striker for most of the preseason matches he played, even the UEFA Super Cup aganist Sevilla he played on the the left of Barcelona’s attack and scored the third goal in a nine goal thriller which ended 5 – 4 in Barcelona’s favour

Presently when the Barcelona legend Xavi Hernadez is no more with barca, and now barcelona are left with Rakitic, Iniesta and Busquets with the new signing Arda Turan waiting still January before he can make his debut for Barcelona.

Rafinha is really important to Barcelona. Get well soon Rafinha Alcantara and come back even stronger and better than before. Because FLYBARCA Cares.