The player, who is a top class poacher has signed for Barcelona’s B-team from Almeria and will start playing for the Catalans in January 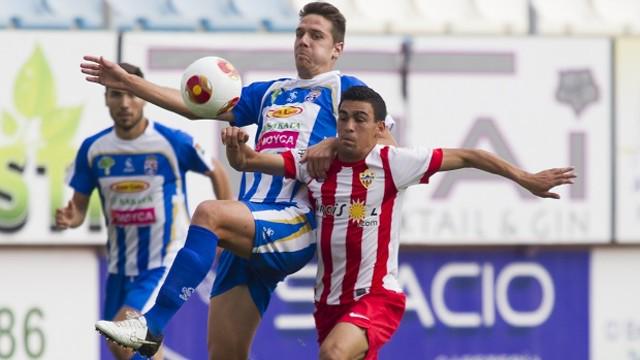 FC Barcelona have officially announced the signing of young striker Dani Romera from second division side UD Almeria for Barça B with the player to make his debut in January 2016.

Dani Romera is a striker who loves to score goals and he had a very good season with Almeria B in the second division where he scored 15 goals for them last year to become the club’s top scorer.

The forward also became the youngest ever Almeria footballer in the Club’s history to make his debut as he got his first ever game with the Almeria first team at just 18 years old and 94 days, when he took part in a game against Galician outfit Celta Vigo.

According to Catalan newspaper SPORT, Barcelona began negotiations with Almeria for the player in June but put talks on hold for certain reasons before Barcelona reopened the deal in August as they seek to rekindle the depleted Barça B squad.

Barcelona B were relegated from the Liga Adelante after finishing dead last on the log and are now featuring in the Segunda B division where they haven’t had a good start despite winning their last game 1-0 against Olot.

Gerard Lopez’ team have suffered the loss of so many players in attack with Adama Traore joining Aston Villa, Munir El Haddadi and Sandro Ramirez promoted to the first team and Alen Halilovic loaned to Sporting Gijon. Barça will be hoping Romera adds the spice the team needs to gain promotion back to the Segunda Division.

Just like fellow new signing Jokin Ezkieta and promoted Asian Seung Woo Lee, Dani Romera is still ineligible to feature for Barceona B until January as a result of the FIFA ban.