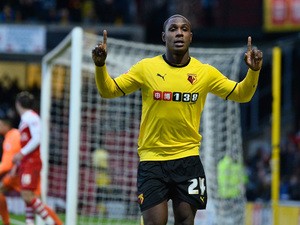 Watford striker Odion Ighalo was relieved to see his team pick up three points in the Premier League for the first time this season.

Despite losing only one game prior to the contest against Swansea City, the Hornets were languishing near the bottom of the table after drawing three games on the spin .

“It was a great performance, but it’s not only this game, you see from the first game against Everton to this game we’ve been working hard as a team,” Ighalo told watfordfc.com.
[post_ad]
“The team has been doing well, even in the last two games we played at home, so it’s a big relief and it’s a big team effort.

“I’m happy about the performance of the team, even when we were one man down we still worked hard to get the three points, so it’s a good day for us.”

Following the win against Swansea City, Watford have climbed to 12th position in the Premier League standings.