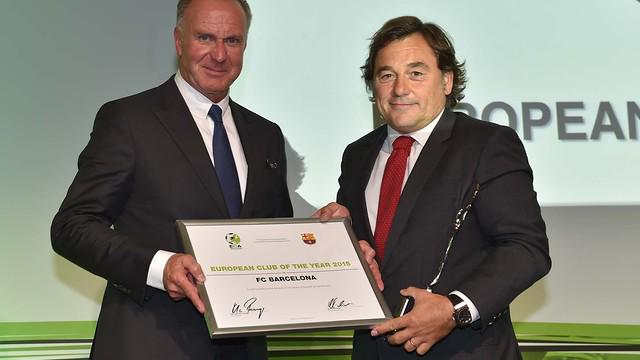 FC Barcelona have been duly acknowledged on Monday by ECA (European Club Association) as the European Club of the Year following their successful campaign in the 2014/2015 season in European club football.

The Catalan club was club was presented with the award on Monday, September 7th in a dinner held in Geneva, Switzerland by a panel ahead of organisation’s General Assembly which is set to take place today (Tuesday) September 8th, 2015, an event in which Barcelona president Josep Maria Bartomeu will attend.

Barcelona director of football management, Raul Sanllehí was the club’s representative at the ceremony and the award was presented by the ECA president and Bayern Munich number one man, Karl Heinz Rummenigge in recognition of the successes of the Catalans for last season both domestically and internationally.

Barcelona were dominant throughout the season in a campaign that saw them scoop their fourth UEFA Champions League title in ten years after beating Italian giants Juventus in the final. They also claimed their 23rd Spanish La Liga title after beating the likes of Real Madrid and Atletico Madrid to finish top of the log at the end of the season. Adding to their UCL and La Liga triumphs, Barcelona also won the Copa del Rey for a record 27th time in history as they became the first team ever to win the treble on two different occasions.

It is the second time the Catalan giants have received the prestigious prize since its inception in 2010 with the first coming in 2011, the year when they last won the UEFA Champions League prior to 2015’s glory. As a result, Barcelona becomes the only club in the history of the award to ever be recognised by ECA on two different occasions.

Alongside Barça, three other clubs were also recognised in the award ceremony. Ukrainian club Dnipro were presented with the ‘Best Sporting Progress’ award for their fantastic performance in the Europa league last season that saw them reach the competition’s final after finishing the two previous campaigns in the Round of 32 stage. Arsenal FC of England were presented with the ‘Best Community Social and Responsibility Programme’ courtesy of their ‘Arsenal Employability Programme’ set up in 2011 to help youths while FC Levedia were given the best achievement award for their ‘Together We Move’ stadium project this year.