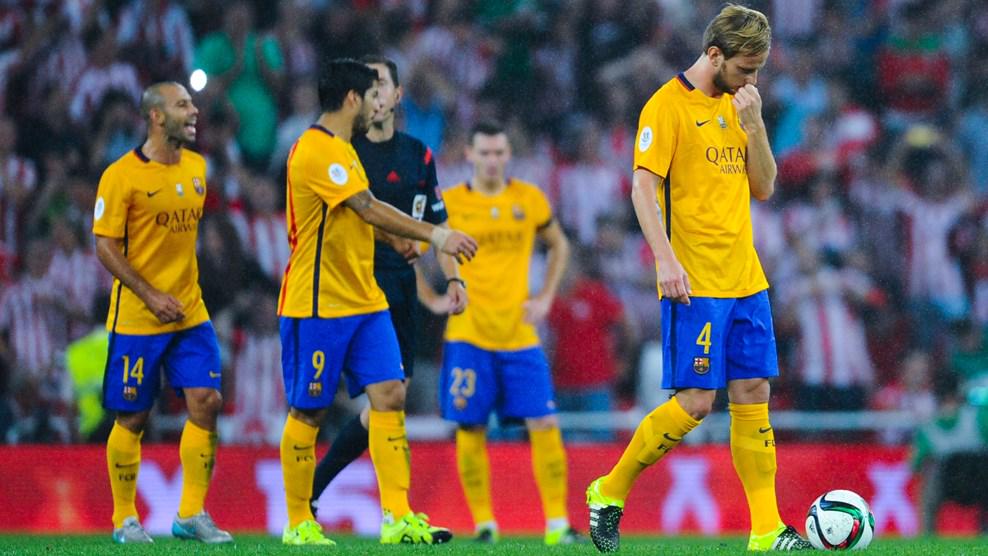 FC Barcelona are in a bid to perform the most incredible of comebacks when they take on Athletic Bilbao in the second leg of the 2015 Spanish Super Cup at the Camp Nou looking to overturn a 4-0 deficit around.

A cracker from San Jose and a hat-trick from Aritz Aduriz ensured the Blaugranas were hammered 4-0 at the San Mames, however, they have the chance to turn around the tie when they entertain Ernesto Velverde’s men at the Camp Nou tonight.

No team has ever overturned a 4-nil first leg deficit in the history of the Spanish Super Cup but anything can happen, especially when it is Barcelona who are in search of the miracle.

For Barça to win this tie and secure their fifth title of the year, firstly, they must score at least four goals. If only four goals are scored by Barça then they must not concede any thereby forcing the game into penalties. Moreover, if Athletic Bilbao manage to score just a goal or more, Barça will have to win the game with a 5-goal margin or more meaning if Bilbao score once, Barça must win 6-1 or more. That’s how difficult it is.

Despite the nature of the task ahead, Barcelona players and fans believe their team will give their all and shock the world but it will be logical saying they can’t win this one due to the fact that Athletic Bilbao are also gearing up, knowing they still have a lot of work to do.

If Athletic come out victorious over two legs, it will be their first title in 21 years. This means the title mean so much to them and they will be ready to play their hearts out in order to put this one in the bag.

As it is, Barça are in search of their fifth trophy of the year to keep their Sextuple dreams alive while Athletic Bilbao are aiming for their first Spanish Super Cup title since 1984 meaning we are in for a tense, cracking game at the Camp Nou.

Luis Enrique will have to work on his defence after conceding 8 times in two games and is likely to implore Claudio Bravo in goal. Adriano is a doubt for the Catalans meaning Jeremy Mathieu who was surprisingly left out of the first leg will be giving a starting place.

Jordi Alba is still out injured and Neymar is still out with Mumps, meaning unsettled winger, Pedro Rodriguez will certainly fill in for him.

FlyBarca Prediction: A tough one but logically, Barcelona will win the game but lose the trophy. Their defence is in shambles and giving the fact that Athletic Bilbao are playing the game of their lives, I see no miracle happening here but Barça will impress.
Barcelona 4-1 Athletic Bilbao (Aggregate: 4-5).