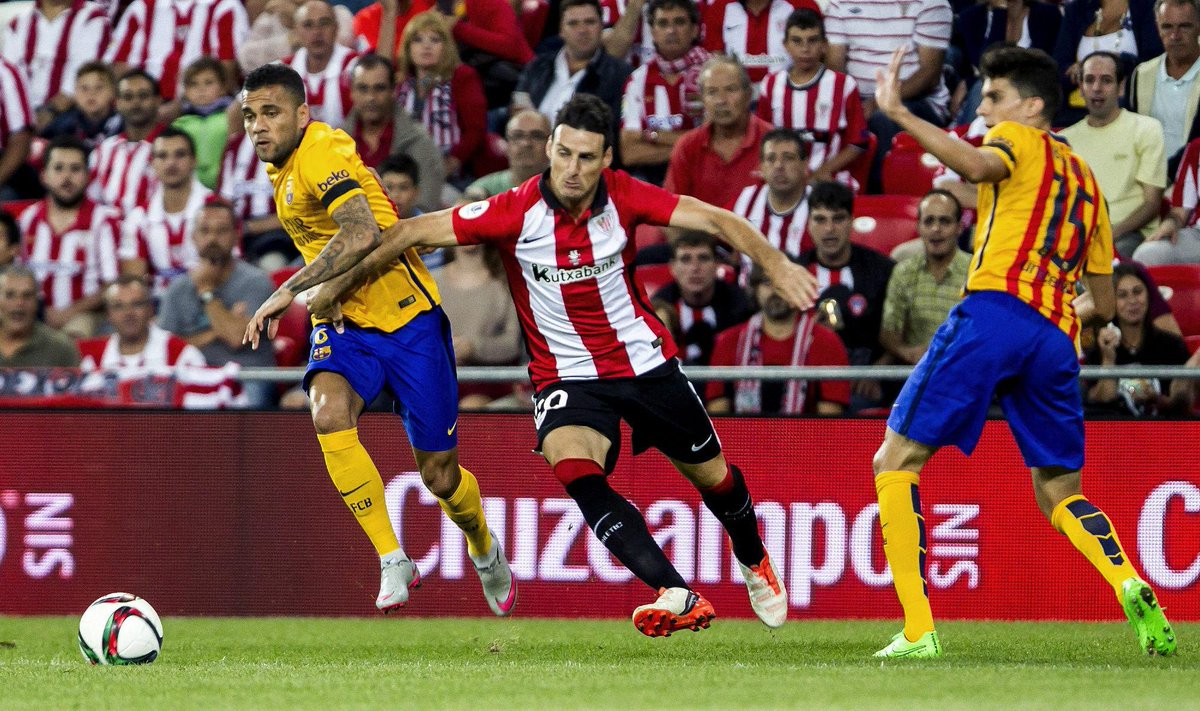 A hat-trick from Aduriz and a goal from Mikel San Jose ensured Athletic Bilbao put 1.5 hands on the Spanish Super Cup as they beat Barcelona 4-0 at the San Mames.

The Catalans came into the game as favourites but were stunned by the determined Basques who have seemingly ended Barça’s hopes of winning the Sextuplet in 2015.

Luis Enrique’s starting XI came as a surprise as he kept the full Barça starting midfield trio – Rakitic, Busquets and Iniesta – on the bench with Rafinha, Mascherano and Sergi Roberto getting the nod.

In defense, Bartra and Thomas Vermaelen were also surprise starters with Pique on the bench and Jeremy Mathieu not called up.

Athletic opened the scoring on 13 through Mikel San Jose after a mistake by Marc Andre Ter Stegen let the player pounce on a chance to net a cracker from 45 yards out.

Barça didn’t look like they needed an equaliser and Athletic were still getting the chances, although Barça bossed in terms of ball possession.

Lionel Messi got the Catalans only shot on target in the first half but Iraizoz was equal to the task pulling off a fantastic save to deny the Argentine.

Pedro struck the bar in the second half and Luis Enrique brought Iniesta on for Rafinha but it didn’t take long before Aritz Aduriz got the second for Bilbao.

Sebin capitalised on a mistake by Sergi Roberto to send in a cross for Aduriz from the left, the huge striker rose higher than Mascherano to head home.

It was three for Athletic just two minutes after the hour mark as Aduriz scored his second of the night, thanks to his positioning as he fired in a square ball into the bottom left corner.

The nightmare continued for Barça after Aduriz completed his hat-trick, scoring from the penalty spot after Dani Alves had brought down Benat in the area.

After a hectic game in Tbilisi 3 days ago, the Catalans were too sluggish and will have to pull off a miracle in Monday’s second leg at the Camp Nou if they are to keep their Sextuple dreams alive.