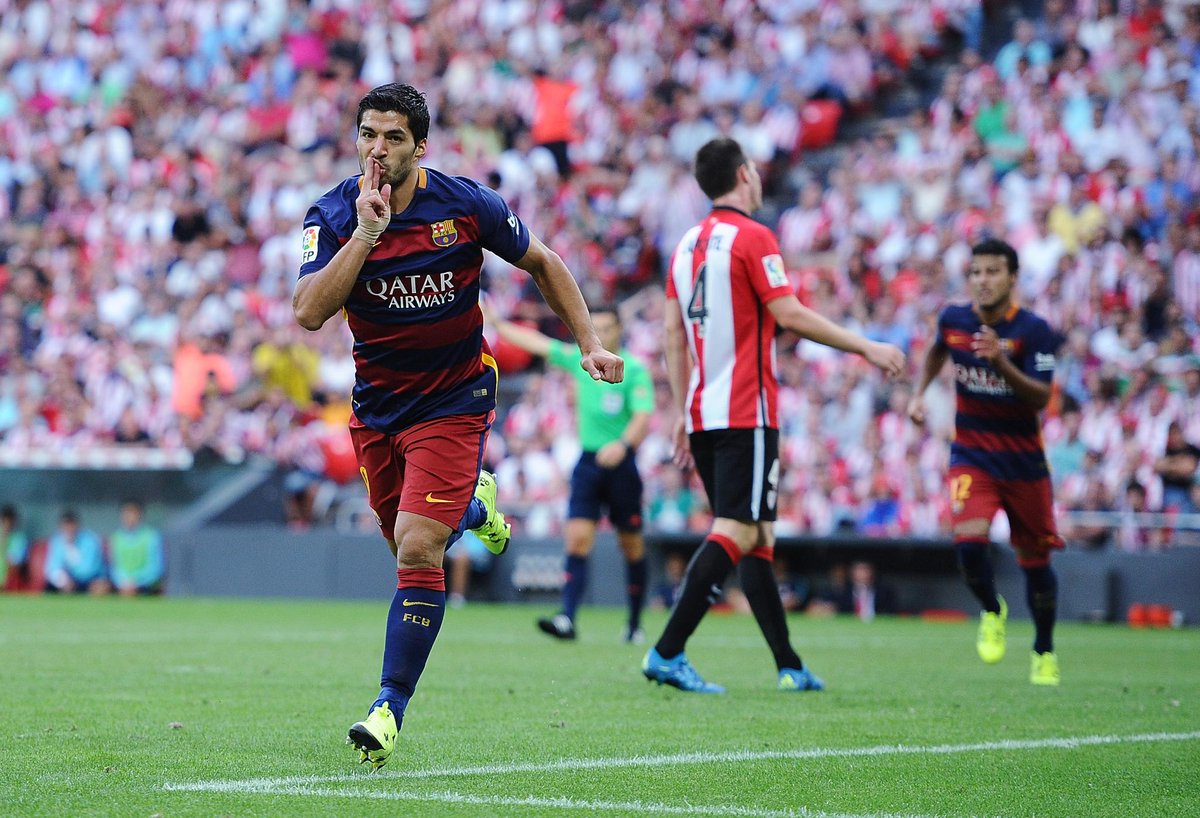 Barcelona got their 2015-2016 Liga season off a winning start after Luis Enrique’s team pulled a hard-earned 1-0 win against Athletic Bilbao at the San Mames.

Luis Suarez 54th minute volley was the difference between both sides as Barcelona take a sweet revenge for their 4-0 Spanish Super Cup loss.

Barcelona started the game on the back foot as they controlled possession but failed to create chances. They had 75% of the ball in the first 10 minutes with 78% of the ball being in their own half as the game got off a sluggish start.

The Catalans were then hit with an injury woe as Dani Alves suffered a groin injury and was replaced by Sergi Roberto after 20 minutes.

Aritz Aduriz – who bagged a hat-trick in the first leg of the Spanish Super Cup against Barça got the game’s first real chance after he flicked a header from Benat’s free-kick but failed to hit the target.

Barcelona were then presented with a glorious chance to take the lead after the referee pointed to the spot as Suarez took a tumble in the area after being clipped by Elustondo. Messi stepped up to take the kick but his weak shot, aimed for the low left-hand corner was parried away by a stretching Gorka Iraizoz.

Barcelona came close moments later as Serg Roberto perfect square ball found Luis Suarez who did well to pull a shot at goal but was nicely kept out by the fingertips of Gorka Iraizoz with Rafinha firing the rebound wide.

The first half ended goalless but Barca came out strong after the interval and finally got the all-important goal on 54 minutes.

Jordi Alba latched onto an incisive pass from deep before picking out Suarez with a magnificent cross, the striker had enough space and time to volley home with his left foot from six yards out.

Luis Enrique’s side continued their dominance and a good play from Rafinha set up Sergi Roberto whose rocket hit the crossbar from the right hand side.

Barcelona injury woes continued as Sergio Busquets was stretched off as he looked to have sustained an ankle injury and was replaced by Marc Bartra.
Iraizoz had to prevent Messi netting Barça’s second after a fantastic run from the Argentine. The star beat his three markers but fired straight to the Athletic goalie.

Athletic Bilbao were much more stronger in the final minutes of the game as they created half chances but Barcelona were winners on the night.