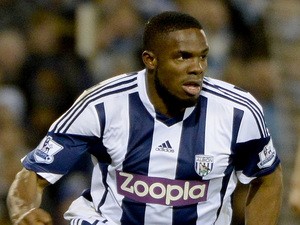 Victor Anichebe netted for the second time in pre season in West Brom’s 4 – 0 thrashing of Bristol Rovers in their final preparation game before the league opener against Manchester City a week on Monday.
At the Memorial Ground on Friday, the two Nigeria internationals on the books of The Baggies – Brown Ideye and Victor Anichebe – were both named on the bench.
But they joined the fray in the 56th minute, with Ideye replacing new signing Rickie Lambert while the former Evertonian came on for Berahino.[post_ad]
Thirteen minutes from time, Anichebe added more gloss to the scoreline, finding the back of the net with a left – footed volley after he was assisted by his countryman Ideye.
Between them, the two Super Eagles strikers netted five goals in pre season.
Tags: NewsNigerians Abroad
Share6Tweet4