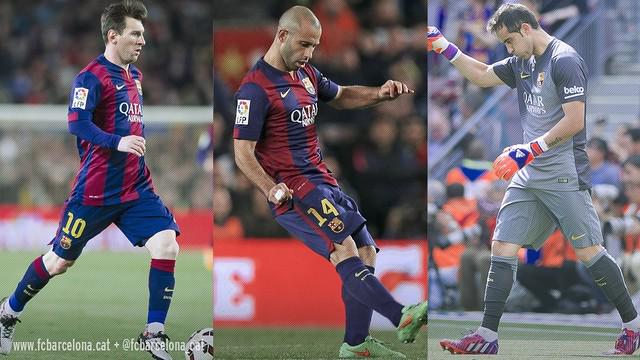 Argentina tackle Chile in the 2015 Copa America final with Messi and Mascherano coming against Barcelona team-mate Claudio Bravo in a bid to secure senior international glory for the first time in their careers.

Chile reached the final courtesy of a 2-1 win over 10-men Peru while Argentina had a stroll in the park walloping Paraguay 6-1 with Messi grabbing a hat-trick of assists.

Messi’s Argentina are seeking their first major trophy in 22 years. Missing out on the 2014 World cup after losing in the final, the Albiceleste have arrived once again in a major final and will look to erase the World cup memory by winning this trophy.

Chile have never won a major trophy in their history and will give their all to win this. They have lost in 4 Copa America finals but have the chance to grab their first with the calibre of stars like Alexis Sanchez, Claudio Bravo, Arturo Vidal, Gary Medel, Eduardo Vargas in their ranks.

However, Chile also have an advantage, as the host nation, they play in front of their fans and with the quality they have in their squad, Argentina can be stunned.

Lionel Messi will be crucial in the final as he aims to win his first senior title with Argentina. He has been the best player in the tournament so far and will cause trouble for the Chile defense alongside Angel di Maria.

Alexis Sanchez and Arturo Vidal will also provide some work for Otamendi and Co.

The Copa America final kicks off on Saturday (today), July 4 at 21:00 CET. Argentina vs Chile.