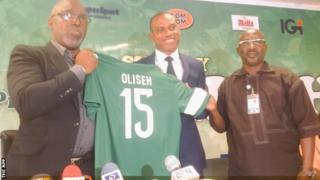 The Nigeria Football Federation, NFF has on Wednesday unveiled Nigeria’s ex-international, Sunday Oliseh as the head coach of the Nigerian Super Eagles.
The NFF reached the decision after it moved to pacify the Director General of the National Sports Commission (NSC), Al Hassan Yakmut and solicited support for the unveiling of Sunday Oliseh as the new coach of the Super Eagles.
The NSC had queried the procedure used in hiring the new Super Eagles’ coach and his Belgian assistant, Jean Francois Losciuto claiming it needs to follow the Procurement Act. Oliseh is taking over from Stephen Keshi, former Super Eagles defender.
Keshi is one of only two people, along with Egypt’s Mahmoud El-Gohary, to have won the Africa Cup of Nations as both a player and a coach.