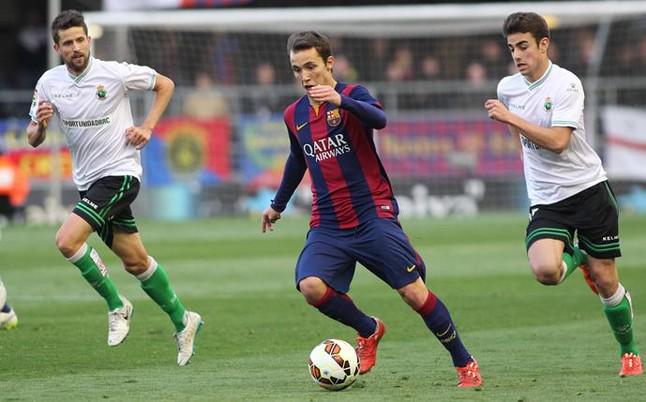 According to SPORT, Benfica are reportedly monitoring the situation of Barcelona B’s 19-year-old left-back Alejandro Grimaldo who is said to be uncomfortable playing in the Spanish third tier division is will like to leave the Catalan club.

With sources claiming Barcelona’s second choice right-back Adriano set to join AS Roma, Barca are left with an option to promote Grimaldo to the first team.

However, Luis Enrique doesn’t seem to be interested in that idea and may use Jeremy Mathieu as Alba’s back-up following the recent rumours that suggest Barca are in touch with Monaco’s Aymen Abdennour to cover the space to be left by Mathieu in the centre of defence.

This means Grimaldo has only one option, to play with Barca B which doesn’t suit the youngster and he may seek greener pastures elsewhere with reports in Portuguese newspaper ‘Record’ suggesteing Benfica are paying close attention to his situation.

Grimaldo is a talented left-back who arrived at FC Barcelona’s academy from Valencia aged just 13.

He made his debut for Barça B in the second division 2 years later when he was just 15 years and 349 days old.

Grimaldo is being tipped by Barca fans to take over Adriano’s role in the first team but Luis Enrique doesn’t seem to buy the idea of promoting the young left-footer.