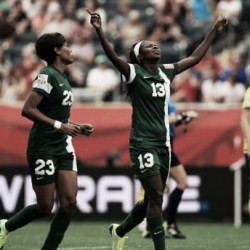 Nigeria and the United States meet on Tuesday in their third match of the 2015 FIFA Women’s World Cup.
Nigeria is coming off a 2-0 loss to Australia, a match in which it just couldn’t get going on either side. Nigeria controlled the ball 49 percent of the match but got just three of its 12 shots on target. Nigeria proved in its 3-3 draw against Sweden that it can be explosive when given the chances, but this team at times can’t get out of its own way. Defensively, Nigeria has allowed a combined nine shots on target and veteran goalie Precious Dede hasn’t had her best performances. Simply put, Ngozi Okobi, who has been Nigeria’s top player this tournament with a goal and two assists, must have a big match for her country to have a shot.
The United States is coming off a 0-0 draw against Sweden, a match U.S. could have easily lost. The United States has controlled time of possession in both of its matches and has seven shots on goal out of its 24 shots overall. Megan Rapinoe and Christen Press have combined for the State’s three goals this tournament. While the U.S. is getting quality looks, America has relied on its defense so far, making it tough to get good looks and goalie Hope Solo has allowed just one goal and come up with five saves. Also, despite playing physical defensively and committing 23 fouls, the United States has just two yellow cards this tournament. You get the feeling that a Carli Lloyd or Alex Morgan game is coming eventually, as they’ve been a little quieter than usual in these first two games.
Nigeria can put pressure on the United States, as it has enough athleticism and speed that can make a difference. However, we also haven’t seen the best from the U.S yet, which can’t make its opponents feel good.
I’m going with the under in this spot, as I’m not sure Nigeria can net a single goal in this match. U.S. also hasn’t been great offensively. This total is a tad bit too high.
Tags: PreviewWWC
Share6Tweet4