Barcelona Sign Aleix Vidal On A 5-year Deal From Sevilla

Barcelona have signed Sevilla’s right-wing player Aleix Vidal on a 5-year deal for a fee of €10 million. 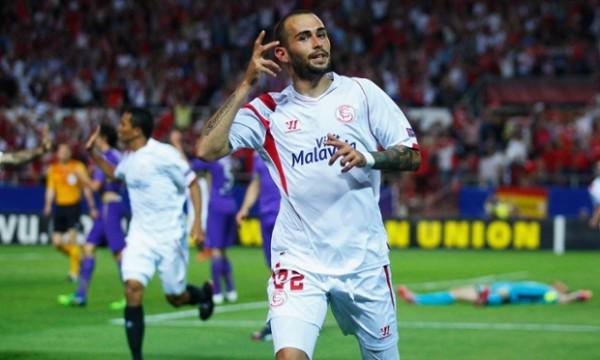 The Sevilla winger is now a Barca player after both teams reached a deal for a transfer to the Camp Nou believed to be worth around €10 million, Catalan based newspaper Sport claim.

The 25-year old is a versatile player who can play anywhere in the right wing be it as a fullback, a midfielder or a winger and he is set to sign a 5-year deal with the Catalan club although Sport suggest the deal will be announced next week.

Barcelona are still serving a transfer ban and will not be able to register the player. He will be allowed to train with the club but will not play any game for them be it official or unofficial until the ban is over in January 2016.

As Barcelona’s right back Dani Alves is likely to leave this summer, the club have snapped a perfect replacement. Vidal is renowned for his versatility and speed and can pull off accurate crosses and powerful long shots from almost anywhere on the pitch.

Vidal is Catalan and is farmiliar with the Barca-culture. He has already helped Sevilla win the Europa League this season.

His 6 goals and 9 assists as well as his impressive performance for Sevilla this season has not gone unnoticed as he was handed his first international call-up by National team’s coach Vicente del Bosque.

His abilities are tremendous as he is a powerful and aggressive playmaker. Let us hope he succeeds. Welcome Vidal!