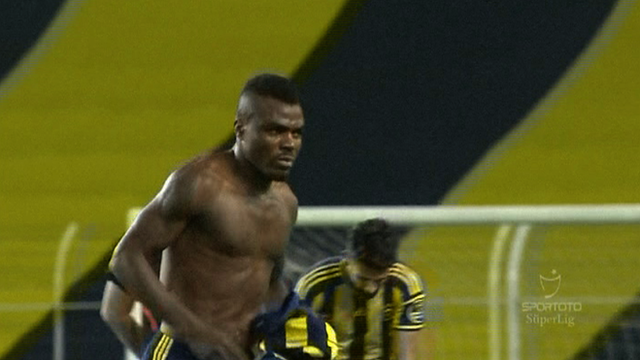 Emenike, booed by Fenerbahce fans
Umm Salal, a football club based in Qatar has been reported to be planning a move for Fenerbahce’s striker Emmanuel Emenike.
In a report made by AmkSpor, a Turkish newspaper, Umm Salal who’s manager is the Turkish coach Bülent Uygun, is preparing a €15 million offer for the Nigerian International.
Fenerbahce who rejected a €10 million offer in January are expected to allow the Nigerian international to leave in the Summer.
The 28-year-old striker was booed by his own fans in the recent Istanbul derby against Besiktas. Emenike took off his shirt and walked off the field in protest but later returned to the game.
Tottenham were linked with a €10 million move in January for Emenike by the newspaper Metro.
Emenike has scored only five goals in 34 league appearances this season in all competitions.
Tags: NewsNigerians Abroad
Share6Tweet4