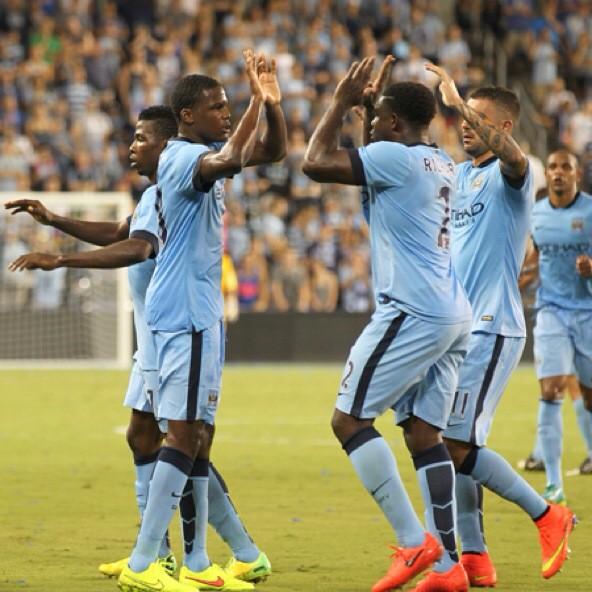 Flying Eagles star Kelechi Iheanacho continued his hot streak of form for Manchester City U-21s on Saturday with another brilliant showing capped with two goal.
The UAE 2013 FIFA U-17 World Cup MVP netted the equaliser and the third goal as City’s Elite Development Squad, coached by Arsenal legen Patrick Vieira, defeated neighbours and U-21 Premier League champions Manchester United 3-1.
United took the lead in the first half through Ashley Fletcher but Iheanacho responded with the equaliser 10 minutes into the second half.
An impressed City Twitter handle described Iheanacho’s first goal thus: “A piece of individual brilliance by Iheanacho, who turns his man and coolly slots into the bottom corner.”
Iheanacho ensured City got their revenge for a heavy loss earlier in the season by scoring the home side’s third goal and his second in the 80th minute, ‘curling the ball into the top corner’ as described by the club’s Twitter handle.
The young Nigerian was the best player on the park on Tuesday night when City beat Southampton in another U-21 fixture. He scored once and assited two other goals.
Saturday’s appearance could mean Iheanacho will not be making his Premier League debut on Sunday against Southampton. He had been tipped to be one of the youngsters Manuel Pellegrini might be considering for the senior game which wraps up the season.
Iheanacho is expected to soon join up with the Flying Eagles squad for the FIFA U-20 World Cup in New Zealand, where Nigeria’s first match is against Brazil at 2am on 1 June