Will Nigeria Be Missed At The AFCON 2015? 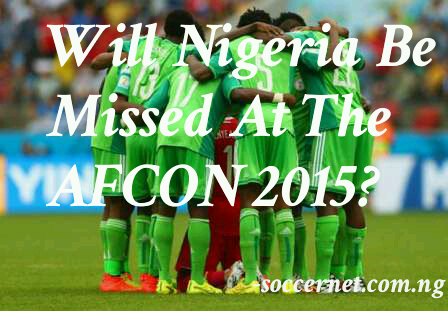 The 30th edition of the African Cup of Nations kicked off Saturday, 17 January 2015.
The tournament which is being hosted by Equatorial Guinea after Morocco withdrew as hosts due to fears over the Ebola disease outbreak in parts of the continent will not have defending champions, Nigeria, defend the title they won in 2013.
The Super Eagles failed to qualify from a relatively easy group and many African football experts are already ruing the absence of the team still handled by out-of-contract Stephen Keshi.
How do you see the 2015 AFCON panning out: Do you think the quality of football on show will be low?
Is it more ‘comfortable’ watching a tournament without your own team (Super Eagles) which saves you nervous moments?
Is the AFCON miss a blessing in disguise in the face of the Ebola threat, or should the Federal Government of Nigeria have accepted to host the tournament when Nigeria’s qualification chances was floundering?
How can the Nigeria Football Federation and technical crew of the Super Eagles and indeed other Nigerian national teams avoid such embarrassing qualification situations in future?
Send in your views and opinions on this topic using the Comment box at the lower part of this page.