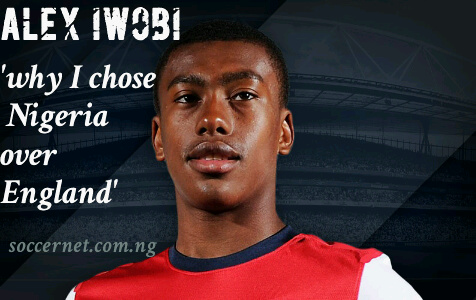 Arsenal Football Club midfielder, Alexander Iwobi, has revealed that his club Manager, Arsene Wenger, had wished he played for England but he chose to play for Nigeria his father land when his father, Chuka Iwobi and his relation who is also a former Super Eagles Captain, Austin Okocha persuaded him to play for the U- 23 national team.
“Wenger had preferred Alex play for the England national team but I and Austin Okocha who is a relation of Alex’s mother, my wife advised him to play for Nigeria and he agreed. Alex has huge respect for Okocha since he has watched his video clips and read about his exploits while playing in England as well as in the Super Eagles. So he agreed to play for Nigeria”, Alex’s father, Chuka Iwobi told Sporting-Life in Abuja shortly after the Dream Team VI training.
The father however tipped his son to make the U- 23 team squad despite the boy slow start in yesterday’s training which he attributed to change of environment and newness in the Nigerian team.
“I have seen Alex squared up against bigger and more experienced players in the UK (United Kingdom) and has excelled so I am confident that he will proof his worth in the Nigerian U- 23 national team He is not expected to click in his first attempt but I know his coaches here might have seen the talent and his skills which is most important.
“Players often faced slow start when they play newly in a team. You could see in today’s training that he wasn’t getting the needed passes and had to track back most times to get the ball. I know with more training sessions with the rest of the players as from tomorrow (Thursday) through Saturday he would improve with the national team” Iwobi senior defended.
Alex’s father, Chuka Iwobi, who hails from Onitsha in Anambra confirmed that his son would leave Abuja for North London on Sunday, failure of which could attract a fine.
“Alex is expected to be here till Saturday and must return to England unfailingly this Sunday. Failure to report to the training ground at the Emirates Stadium on Monday would attract a fine.
“But I hope he would have proved himself with the Nigerian U- 23 national team before then”, Iwobi senior disclosed”.
-Leadership Ng