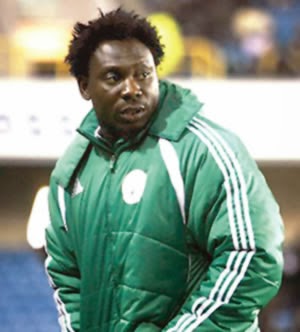 Former Nigerian striker and Super Eagles stand-in coach, Daniel Amokachi has blamed illiteracy and football agents for the transfer saga which saw Emem Eduok dismissed from the Eagles camp for the games against Cote D’ Ivoire and Sudan.

The 20-year old Eduok had signed contracts with Norwegian side, Sarpsborg 08 and then Esperance of Tunisia in what could ultimately lead to a FIFA ban to him, and was subsequently dismissed from the Super Eagles camp in Abuja.

And Amokachi, who had initially stated that they won’t be missing the Dolphins forward, has now slammed agents for often misleading players.

“It’s not the fault of the players, because we have just about anybody that poses as an agent and you see them always roaming around players and they convince players to do stupid things.
“We should understand that we footballers usually come from the ghetto and most of us are not very sound education wise and when they give you a paper you just up sign and you don’t even know what you’re doing.”
“But I think we should focus more on informing the players and the clubs, they have to focus on educating the players on who to talk to. If somebody approaches them, they should have somebody reliable enough to represent them,” Amokachi told sl10.ng.
It remains unclear how the situation will be resolved, as Sarpsborg are insisting that Eduok is now their player, while Esperance have released a statement that they expect the 20 year old to return to them after Nigeria’s assignments against Sudan and Ivory Coast.
Culled from SL10