Ideye Linked With A Possible Move To Sunderland 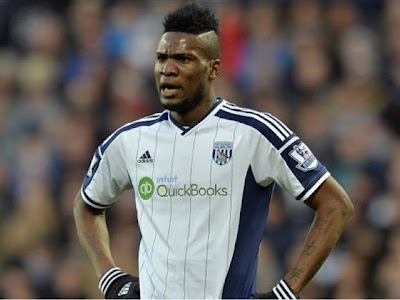 English club side, Sunderland, have been reported to be interested in bringing Nigeria international striker, Brown Ideye, over to the Hawthorns.
According to The Mirror and The Daily Star, Ideye may be joining Sunderland at opening of the January Transfer Window. The 26-year-old has failed to impress following his move to the Midlands and has scored just twice in 12 appearances on the back of a summer in which he was excluded from Nigeria’s World Cup squad.
Sunderland were in the running for Ideye at the end of last season and hope a £6million offer will persuade new Albion manager Tony Pulis to sell.
Pulis had dropped a very strong hint on Saturday that there will be a lot of transfer activity at West Brom this month.
“We have a difficult job on our hands. A lot of clubs are fighting for survival. “This will be a big window for us. We need to strengthen the team and the squad,” Pulis was quoted as saying by the club’s official website, www.wba.co.uk shortly after watching the Baggies trounce Gateshead 7-0 in the FA Cup.