I will be delighted If Oparanoize Wins – Oshoala 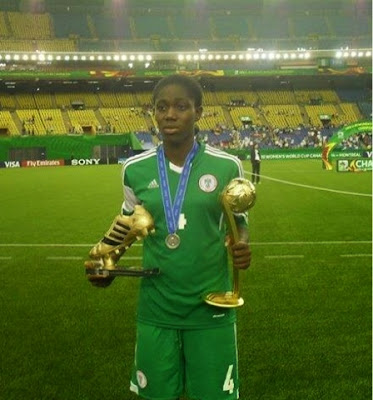 Asisat Oshoala has admitted that in as much as she will love to be crowned African Woman Footballer of the Year during Thursday’s Award ceremony billed for Eko Hotel and Suites, Lagos,she would also be happy to see her compatriot Desire Oparanoize emerge winner.
Speaking to Complete Sport at Saturday’s Football for Hope charity game at the Campus square mini stadium, Oshoala said she believes the award will spur her to greatness.
“Its going to be a tough call because I’m up against my teammate for the award but I hope I win but if not I will be delighted she wins it,” she stated.
“We both deserve it but the polls will decide.”

Both Asisat and Oparanozie proved their mettle at the African Women Championship to lay claim to the prestigious award. While Asi­sat Oshoala emerged the tournament Most Valuable Player (MVP), Oparanozie claimed the Golden Boot Award as the highest goal scorer in the tournament.
Source:Complete Sport