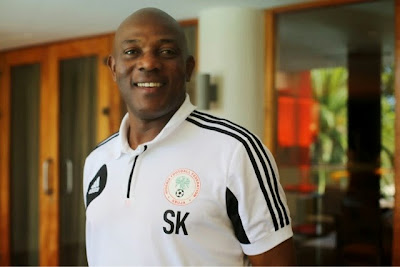 To the disappointment of so many Nigerian Football Fans, recent indications have proposed that the NFF have finally settled for Stephen Keshi as the head coach of the Super Eagles of Nigeria.

The Super Eagles will not be present at the 30th edition of the African Nations Cup,and most people blame it on Keshi. The NFF board headed by Amaju Pinnick had earlier vowed not to have anything to do with a ‘failed coach’, but a source said Tuesday that the federation had concluded plans to hand Keshi a new contract.

The outgoing year was one in which Nigeria’s most celebrated sports, football, was subjected to all manners of battering, attracting negatives headlines in the global arena, especially after the Keshi-led Eagles were bundled out of the Nations Cup. It was learnt Tuesday that the NFF board had reached out to Keshi who is holidaying with his family in the United States to come for a new contract. Though, the decision is said not to be going down well with some NFF executive committee members who have sworn not to have anything to do with Keshi.

The NFF had earlier fired Keshi only to later be forced to rescind its decision on the orders ‘from above’ before the last two qualifying games.
Some sports analysts are of the view that the decision to bring back Keshi after failing to take Nigeria to the Nations Cup in Equatorial Guinea will certainly do the nation’s football no good in the New Year. To them, the frosty relationship between Keshi and his employers (NFF) will continue to play out.

But former national team player Ademola Adeshina told The Guardian Tuesday that giving Keshi another chance was not a bad decision by the NFF.
Adeshina who played club football for the defunct Abiola Babes and also Shooting Stars FC of Ibadan said. “I have been on holiday in Europe and I am just returning to my base in Oshogbo. I watched some of the matches in Europe and I felt Keshi should have been sacked immediately after the Super Eagles lost 2-3 to Congo in Calabar. I also expected Keshi to take a walk after failing to qualify Nigeria for the Nations Cup.

“But I have taken my time to look into some of the circumstances that led to the failure and my conclusion is that it will be a good ideal to retain Keshi because he may have learnt from his mistakes. As the coach, Keshi is the one to take the blame for the team’s failure, but I personally blamed the players for the unpatriotic nature they handled the qualifiers for the 2015 Nations Cup. I watched the game against South Africa on television in Europe and I was so disappointed with the players’ attitude on the pitch. I don’t see anything wrong in the decision of the NFF,” he said.
Adeshina represented Nigeria at Seoul ’88 Olympics and also made several appearances for the senior team, including five FIFA World Cup qualifying matches. He played at the 1984, 1988 and 1990 African Cup of Nations finals.

Efforts to speak with officials of the NFF yesterday could not yield fruits, as the Spokesman Ademola Olajire and President Amaju Pinnick refuse to pick their calls as at press time.