It was all too easy for Luis Enrique’s men as a Hat-trick from Pedro Rodriguez ensured the Catalan giants teach Huesca a huge lesson by mauling them 8-1 (12-1 on Aggregate) to secure a safe passage into the Round of 16 of the 2014-2015 Spanish Cup. 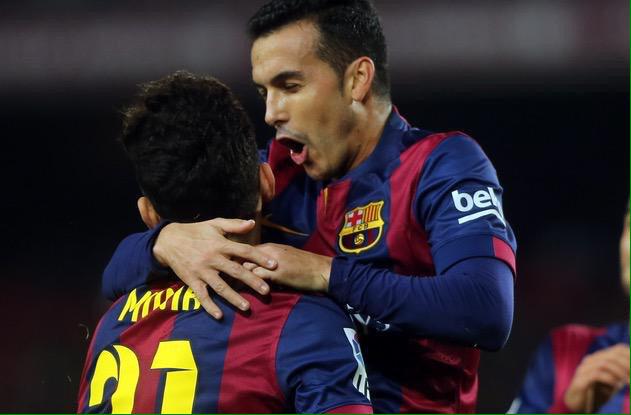 The visitors started the game as the brighter side after they created the first two chances of the game, of which the second was denied by the post.
It was as if they stepped on the tiger’s tail as Barca started the mauling on 21 minutes after Pedro scored from a Munir assist.
Pedro then added his and Barca’s second five minutes later before Midfielder Sergi Roberto made it three on 29 minutes.
The Blaugranas who were without major star players continued to control the game and ended the first half 5-0 as Andres Iniesta got the fourth and Pedro completed his hat-trick on the 44th minute.
The duo were subbed off at half time and Barca made it six in 68 minutes courtesy of a beautiful Adriano strike.
The host were still not contented and 18 year old substitute Adama Traore netted the 7th of the night.
Barca B striker Sandro Ramirez then made it 8-0 before Huesca grabbed a late consolation to end the game 12-1 on Aggregate.