by Biyi Akangbe
in News
0
follow mefor updates. The German forward nets hat-rick as Bayern Munich comfortably won Eintracht Frankfurt 4 – 0. And Shaqiri also found the net, which was the last goal of the game. 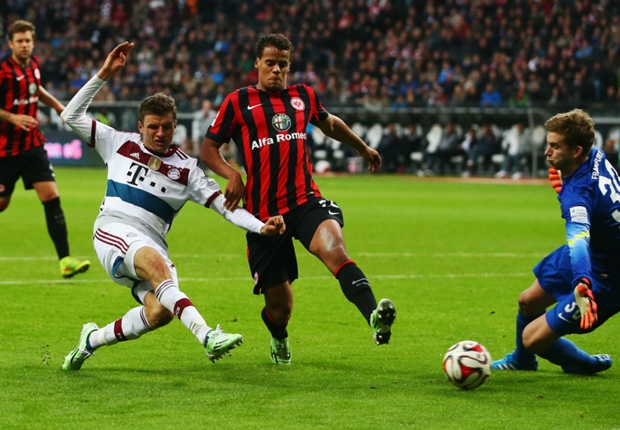 The German forward Muller scored the first goal of the game single handedly, while the next goal came with a wonderful assist from the UEFA player of the year (2013) which gave Muller the second goal in the second half with 64 minutes on the clock.Then the goal that made it an hat-rick came from the world cup winner Mario Gotze who played the ball in Muller to do the finishing. Muller got his 3 – goal three mintes after the 2nd goal. What a wonderful player a brace in four minutes. On the 76th Minute Franck Ribery was subbed out for Xherdan Shaqiri, who also found the net on the 86 minute to make it a comfortable defeat and it was a goal assisted by Sebastin Rode who was also subbed in for Philip Lahm in the 72nd minute. The win extends the champions unbeaten run to 17 games in all competitions, which moves them higher, that is seven point behind the 2nd, Although Wolfsburg are yet to play their match, as they welcome Hamburger SV on sunday at 15:30 (NIG TIME)