by Precious
in News
0
Share on FacebookShare on Twitter
Lionel Messi beautifuly smashed Raul’s record as Champions League top scorer ever by grabbing a well-taken hat-trick in Barcelona’s 4-0 Group F win away at APOEL on tuesday, while striker Luis Suarez opened his goal account for the Camp Nou outfit. 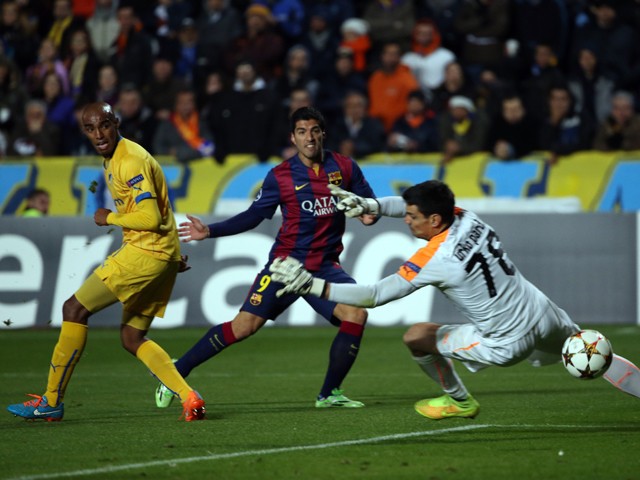 The visitors were dominant from the start, with Dani Alves finding his way into the box before pulling the ball back to Suarez in the sixth minute, but the Uruguayan’s shot was blocked and turned behind.
The former liverpool man came close once again, recieving a pass from Messi and driving a low shot, but APOEL Goal Keeper, Urko Pardo made an astonishing save to deny the player his first Barca goal.
However, Suarez didn’t stand back, as he broke the deadlock for Barca on the 27th minute. The Number 9 collected the ball at the edge of the box, beat his marker with a superb turning flick to find himself one-on-one with Urko, then he sliced a beautiful curl into the net to bag his first goal for the Blaugranas.
With seven minutes left to play in the first half, it was the time all Barca fans were anticipating, Messi doubled Barca’s lead when he seized on Rafinha’s shot to deflect the ball into the opposite direction to deceive the keeper. This was the Argentine’s 72nd goal in the competitions history, ensuring that he surpasses Raul to become the all time leading scorer in UCL history.
Barca finished the first half with a Two-goal lead but continued the party in the second 45.
A superb run from Messi helped set up Pedro at the edge of the box, but the winger’s finish went just half-a-yard wide.
After the miss, Behold! The record-breaking Argentinian struck again just before the hour when he seized on Alves’ pass to slot in a magnificent touch and kill off the game.
A mid-tragedy struck the visitors when Rafinha, who was outstanding throughout his time on the pitch, was sent off after receiving his second yellow of the night. The Brazilian will miss next matchday’s Crucial game against PSG along with fellow countryman Dani Alves who got a yellow card.
APOEL, however, also found themselves down to ten men in the dying stages when Joao Guilherme collected two bookings to even the amount of players on each side.
To round everything up, Messi completed his hat-trick when Pedro pulled the ball back from out wide to leave the record-breaking striker with an easy tap in and cap off a sensational night for him and for his club.
Barcelona still sit second in group F as PSG defeated Ajax 3-1 to retain top spot. However, both teams go head to head in the final group game at the Camp Nou next month to decide who tops the group.
Tags: Lionel MessiLuis Suarezmatch-centreNews
Share6Tweet4