Oshoala: Lagos, pop culture and a cultural landmark for women’s football in Africa

On Friday, Barcelona Femeni broke and recreated a history they set barely a fortnight ago at the Camp Nou

When Barcelona Femeni defeated Real Madrid in the second leg of the quarterfinals clash of the UEFA Women’s Champions League, Asisat Oshoala was part of the 91,553 record makers in the stand.

Sporting a blue-dyed hair, she signed autographs and took photos with some of her fans on the day. It was not just any day, she had just become a significant part of history. 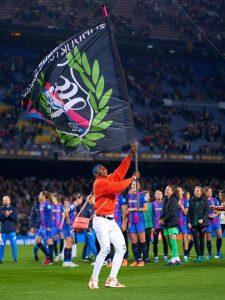 Barcelona Femeni only became a professional team in 2015, and in seven years they have won it all. At a time when women’s football is hitting the heights, the Blaugranas are seated at the centre, scoring truckload of goals, entertaining the fans and building a core local identity. Oshoala, from Lagos, Nigeria – a city that tells the typical African story, in its fleeting gloriousness and struggles, has been part of that history.

Not the most loyal women’s football enthusiast would have predicted the events of the past two weeks happening so soon. But with the audience gotten in the 2019 FIFA Women’s World Cup, it was certain that part of football had begun to reach for the stars.

Every nation or region has its icons. As local Spanish girls now want to be like Barcelona Femeni’s star attraction, Alexia Putellas, it’s definite she is the cultural standpoint and the greatest example in the team.

Faraway from Spain, Oshoala is selling the Nigerian and African dream. Women’s football in Africa was championed and pioneered by Nigeria and Lagos has a significant role in that history.

Lagos has always been one of Nigeria’s greatest football cities. It’s filled with talents and its place in the growth of the women’s game in Nigeria can’t be undermined. Oshoala oozes Lagos.

As she held the Barcelona flag in front of one of the biggest football attendance you can see anywhere in the world, pride was written all over her face. It was a journey she’d never have imagined.

She has come some way, carrying the dream of generations and the hopes of millions. Her current status in global football wasn’t accidental, she earned it.

Nigeria and Africa have had equally special female footballers, like Mercy Akide and Perpetua Nkwocha but Oshoala is reigning at a time Africa is getting into the discourse better. The continent is not just a flashpoint, it casts a beam of light now. Her presence is an experience of one of the biggest products Africa is selling to the world now – pop culture.

And she’s not just laying a path to better years for African football, she’s a glowing example at it.

In the Spanish capital city, Oshoala’s heir-apparent, Rasheedat Ajibade is also selling the Lagos dream. There’s a lot in Africa’s most populous city and dreams and greatness are a strong part.

Ajibade has been brilliant with the Atletico Madrid Femeni this season and is currently one of the Super Falcons’ most important players. It’s not strange to see Ajibade and Oshoala sharing a laughter, spotting coloured hairs.

They are Africans, they’re pop, they are examples of possibilities.

Oshoala was not in the stands on Friday when Barcelona made history again, this time with 91,648 fans in attendance, she was on the pitch.

Many girls coming out of the streets of Lagos would desire to be like Oshoala. She’s a landmark. The kind of figure who makes opinions change. She’s a cultural icon and has shown it, time and again.