After 28 years, federal government hands over houses to 1994 Super Eagles

On Friday, Minister of Works and Housing, Babatunde Fashola handed certificates of occupancy to members of the 1994 Super Eagles squad.

The squad, dubbed the best in the history of Nigerian football, won the African Cup of Nations in Tunisia 28 years ago and were pledged houses by the Sani Abacha-led government at the time.

The houses are three-bedroom apartments built in the  states of the players’ choice.

Some of the members of the squad are no more alive including skipper Stephen Keshi, Wilfred Agbonavbare, Thompson Oliha and Uche Okafor. 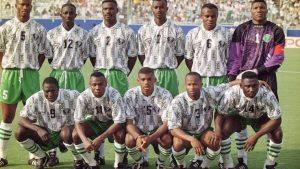 Nigeria defeated Zambia 2-1 in 1994 to win its second AFCON. Emmanuel Amuneke was the hero on the day as he grabbed a brace to give Nigeria a continental trophy for the first time in fourteen years at the time.

The squad also qualified Nigeria for the World Cup for the first time and were rated one of the most exciting sides to see in USA.