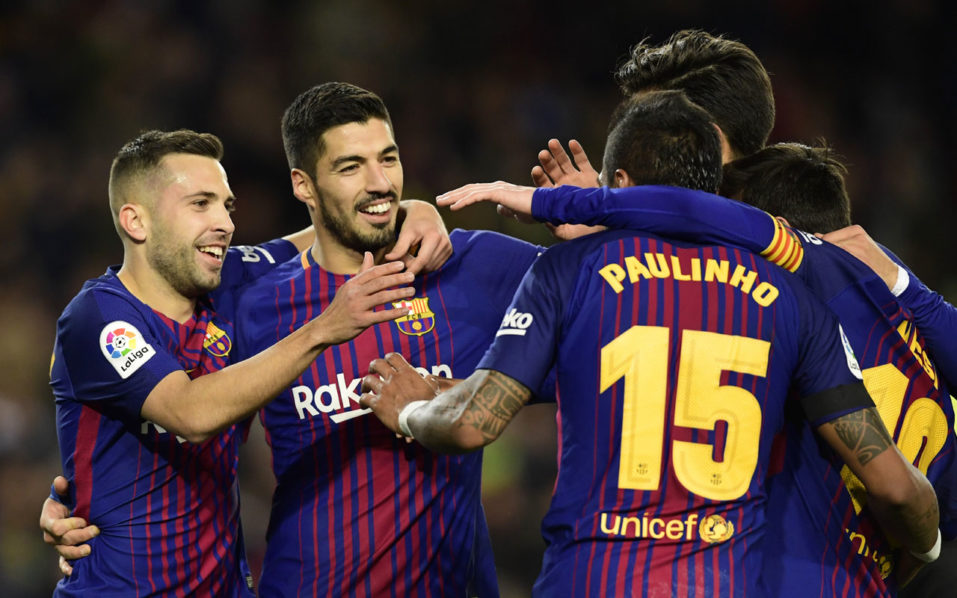 Barcelona opened up an 11-point La Liga lead over Real Madrid ahead of next weekend’s Clasico between the Spanish giants as Luis Suarez and Paulinho each scored twice in a 4-0 thrashing of Deportivo la Coruna on Sunday.

Real remain down in fourth, but do have a game in hand on their rivals as they missed out on domestic action this weekend to win the Club World Cup in Abu Dhabi on Saturday.

“I know people fixate on the difference between us and Real Madrid, but Atletico are just six points behind,” said Barca boss Ernesto Valverde.

“No matter what happens on Saturday, there is still a world of a way to go in La Liga.”

The only drawback for Barca as they extended their unbeaten run in all competitions to 24 games since they were beaten by Real on their last visit to the Santiago Bernabeu in the Spanish Super Cup back in August, was a muscle injury to Paco Alcacer that will keep the forward out for three weeks.

Messi paraded his fourth golden boot award — after being the leading scorer in Europe last season — before kick-off and could barely believe his luck as he failed to add to his 18 goals already this term.

The Argentine has now hit the woodwork 14 times this season, but still had a huge role to play in three of Barca’s four goals.

Only a series of saves from Ruben Martinez to deny Messi and Aleix Vidal delayed Barca until the 29th minute from going in front when Messi presented Suarez with an early Christmas present to tap in from close range.

– More goal-line controversy –
Messi then smashed against the bar, but the woodwork wasn’t so forgiving for Deportivo when Messi’s next attempt came off the post and into Paulinho’s path to make it 2-0 before half-time.

Suarez thought he had his second of the night moments later when the ball looked to have crossed the line.

However, for the second time in less than a month Barca were foiled by La Liga’s lack of goal-line technology as the goal wasn’t awarded.

“I could see clearly from my position after shooting because I was right by the goal line,” Suarez told BeIN Sports Spain.

The Uruguayan, though, had to wait just two minutes into the second half to net his fourth goal in three games by sweeping home Sergi Roberto’s cross.

Messi hit the woodwork for a third time and then saw Martinez brilliantly save his effort from the spot after Suarez was upended inside the area.

But Martinez was helpless as Paulinho profited from a repeat of his first goal when he rolled into an empty net on the rebound after Jordi Alba also hit the frame of the goal.

Earlier, Villarreal bounced back from three straight defeats as Pablo Fornals grabbed the only goal in a 1-0 win at Celta Vigo.

Victory allowed Villarreal to leapfrog back above Girona into sixth after the Catalans had edged the battle of the high-flying newly-promoted sides over Getafe 1-0 thanks to Cristhian Stuani’s early goal.

Managerless Las Palmas struck twice in the last 10 minutes to snatch a 2-2 draw with Espanyol, but remain rooted to the foot of the table.