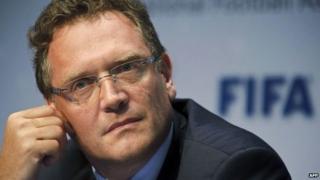 World soccer ruling body, FIFA, has sacked it’s secretary general Jerome Valcke in addition to the recommendation that he should be banned from football for nine years.

The 55-year-old Frenchman is currently suspended from all football-related activities ‎for his alleged involvement in a scheme to profit from World Cup ticket sales.

His dismissal was confirmed via a statement from the football body as follows: “The FIFA emergency committee decided, on 9 January 2016, to discuss Jerome Valcke from the position of FIFA secretary general with immediate effect.”

Valcke, formerly regarded as Blatter’s number two, has been accused of being party to a potential $10m (£6.8m) bribe paid to Jack Warner, the former head of the North and Central America football governing body Concacaf, in return for his backing/vote for South Africa’s successful bid to host the 2010 World Cup.