The Barcelona talisman’s strike against Bayern Munich picked up an astonishing 39% of votes as he beat Ronaldo, Ramsey and Neymar to Uefa Best Goal of the Season 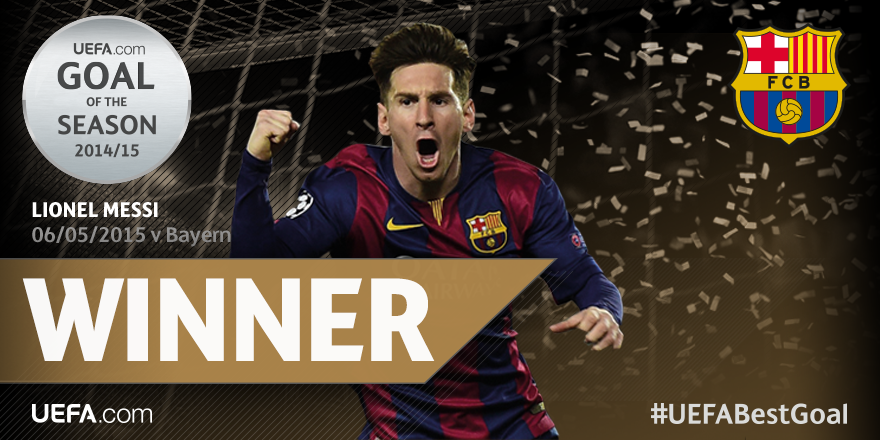 Barcelona forward Lionel Messi continues to dominate the world football scene as his goal in Barça’s Uefa Champions League 3-0 semi-final win against Bayern Munich last season has been voted as UEFA’s best goal in Europe for the 2014-2015 season.

Barcelona drew Bayern Munich in the Champions League semi-final, a game which the whole footballing world were highly anticipating. An in-form Barça against Pep Guardiola’s gigantic Bayern team. The first leg at the Camp Nou looked as if it will end goalless but Messi’s quick-fire double turned the tie around, with the star’s second strike a wonder.

The Argentine picked the ball on the right wing from Rakitic and was presented with the task of going past Jerome Boateng. Messi didn’t disappoint as he left the German defender floundering, falling down like a sack of potatoes before pulling out a sublime chip to beat Manuel Neuer. The goal gave Barça a 2-goal lead with 10 minutes to play and is regarded as on of the sweetest goals in the past years. Barça went on to win that game 3-0 and qualified for the final after triumphing 5-3 on aggregate.

That goal from Lionel Messi broke the internet as it topped the twitter trends. It scooped an astonishing 39% of the possible 507,478 votes.

Cristiano Ronaldo’s strike against Liverpool in Madrid’s 3-0 win against the Reds in the group came second on the list with 24% of the votes. The most fascinating part of the goal apart from the finish is the build-up from the Real Madrid players.

Arsenal’s Aaron Ramsey was third courtesy of his magnificent volley in the Gunners’ 4-1 against Galatasary to give Arsene Wenger’s men their 15th consecutive UCL qualification. The wonderful strike got 9% of votes.

Barcelona’s second representative on the list, Neymar junior finished fourth with his beautiful strike against PSG in the Uefa Champions League quarter final second leg win. The major reason for this goal’s nomination is the magnificent build-up from Andres Iniesta that saw the midfielder move the ball from his own half, beating all the markings thrown at him before providing a magnificent assist for Neymar to finish off as Barça won 2-0, qualifying for the semi-final 4-0 on aggregate. The goal got 7% of the votes and was the most watched on UEFA’s website.

Eric Lamela’s beautiful ‘Rabona’ goal against Asteras Tripolis in their 5-1 UEFA Europa League win was 5th on the list picking up 5% of the votes.

Vasyl Kobin brilliant acrobatic bicycle-kick goal for Matalist Kharkiv against Ledia Warsaw came 6th on the list with 4% of votes. The Ukrainian’s scored just three goals in the Europa League last season, but this strike was one to always remember.

Wolfsberg star man Kevin De Bruyne scored 5 UEFA Europa League goal for the Germans last term, but his amazing volley against Lille OSC was 5-times more spectacular than the rest. The goal finished 7th on the list with 4% of the votes.

Antunes long-range rocket against Everton in the Europa League is in 8th spot, garnering 3% of votes. The strike helped Dynamo Kyiv turn a 2-1 first leg deficit around to beat the English side 6-4 on aggregate.

Scotland Under-19 player Robbie Muirhead’s long-range strike from 35-yards out against Norway took the 9th position with 3%.

Mariam Abdulai Toloba was the only woman on the list. The Belgium Under-17 star scoredd a spectacular goal in her team’s 5-0 win over Wales and completed the top 10 with 2% of votes.

This is the inaugural UEFA Goal of the Season Award and it has been won by Messi. However, the player will be vying against Luis Suarez and Cristiano Ronaldo for a more prestigious honour – the UEFA Best Player in Europe award. Messi joins Marc Andre Ter Stegen as award winners of the day after the goalkeeper scooped the award for Best save of the season with 28% of votes.